The Dangers of Xylitol: A Family’s Devastating Loss

“Aslan was our sweet protector,” Cindy said about her family’s beloved, eight-year-old cockapoo. Like the character in C.S. Lewis’s The Chronicles of Narnia that inspired Aslan’s name, “he was a gentle lion.”

Cindy and her family had always been vigilant about keeping foods, such as chocolate, grapes, and raisins, away from their pups. But like most dog owners, they didn’t know about xylitol.

This increasingly popular sugar substitute is used in hundreds of consumer products, including sugar-free baked goods, nut butters, and gum — the biggest culprit of xylitol poisoning in dogs.

Even a small amount of xylitol can be life-threatening, causing low blood sugar (hypoglycemia) within 30 minutes, leading to seizures, coma, or death. Xylitol can also cause long-term liver damage or liver failure.

On Thanksgiving night, Aslan followed his nose to a nearly full container of Hershey’s® Ice Breakers Ice Cubes Gum, which was tucked inside a backpack. It took only seconds for Aslan to pull out the container, pop it open, and gobble down 30 pieces of sugar-free gum.

Don't delay! If you suspect your dog has eaten something containing xylitol, have your dog seen by a veterinarian. Time is of the essence!

Read more about: xylitol poisoning and 700+ products xylitol is in

Cindy immediately went online and learned they had to get Aslan to the hospital right away. Fifteen minutes later, the family arrived at one of the top emergency animal hospitals in Atlanta.

Although their cockapoo showed no signs of illness, the poison was already rushing through his system. For a 22-pound dog like Aslan, approximately 1 gram of xylitol can be toxic. He’d consumed 30 grams.

The hospital treated Aslan’s hypoglycemia, and monitored his blood glucose level, liver values, and other key health markers. “For two days, he was fine,” Cindy said. But on Day Three, he started to decline, and received supportive care for his liver and blood plasma transfusions.

Because of COVID-19, Cindy, her husband, and their three children were allowed to visit their sweet protector for only thirty minutes a day. The family made the most of their time, snuggling Aslan, singing to him, and saying his “cue” words. On Day Four, Aslan seemed to rally. He drank water and ate some chicken. The doctors thought their patient was finally out of the woods. “We felt like our prayers were being answered,” Cindy said.

A turn for the worse

On Day Five, the family arrived at the hospital with Aslan’s leash, hoping to bring him home. Unfortunately, his liver values had gone back up. “He was lethargic,” Cindy said. “He was jaundiced. He wouldn’t eat.” On Day Seven, the hospital put him on a feeding tube.

Meanwhile, Cindy spent most nights sleeping in her car in the hospital’s parking lot, in case Aslan’s condition changed. “Moment by moment, we were trying to make a decision about what to do,” she explained. “We asked the kids what they wanted to do. We thought about how to raise money for his care. We thought about bringing him home, but he would not have had a peaceful death.” The family decided as long as there was hope, and Aslan wasn’t in pain, they’d continue his treatment.

On Day Nine, Cindy received a call shortly after 8:00 p.m. She’d been in the hospital’s parking lot since 1:00 p.m. Aslan’s heart had stopped, but the doctors were able to resuscitate him so she could say goodbye.

“I was ushered back to see our sweet protector,” she said. “I was so thankful I could do that, and I’ll be forever grateful to the staff. I asked for Aslan’s forgiveness for not being able to protect him.” Cindy put her hand on his heart and felt it slow down. At 8:18 p.m., after fighting for 192 hours, Aslan died.

The family is devastated. “There is an unnecessary hole in our hearts and home,” Cindy said. “Our children have lost their best friend, their listener, their comforter, and their safe confidante of tangible unconditional love. His death was pointless. It could have been avoided. But I don’t want his death to be in vain.”

The family wants to spread the word about xylitol and encourage Hershey and other manufacturers to include a warning label on their packaging. They’ve already reached out to three different divisions at Hershey, but the company’s responses have been inconsistent and haven't resulted in any visible changes to date.

If you suspect your dog has ingested a product containing xylitol, contact your veterinarian or Pet Poison Control, or go to your local Animal ER right away. 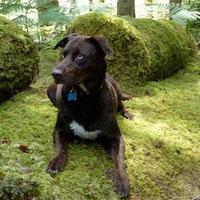 As a longtime copywriter and content writer, Keri has penned everything from coffee packaging and bank brochures to hotel websites and non-profit newsletters. She loves writing about animals, most of all, and is delighted to be a part of the Preventive Vet blog team. When not at her computer, Keri is either knitting a sweater, reading a mystery novel, taking a road trip, or curled up on the sofa with her husband and their blue-eyed chocolate lab mix.