What Your Dog's Poo Can Tell You About Their Health

Though it may not be your favorite topic to think about or discuss, your dog’s poop can actually provide some good clues about their health. Now, I’m not going to go so far as to say that, like the eyes are the windows to the soul, poop is the window to overall health … but it definitely can provide a glimpse!

So here’s the skinny on why you should go outside with your dog when they go to the bathroom and generally pay attention to your dog’s poops. They could be trying to tell you something.

The poop and pooping characteristics outlined below are a general guide. What’s also very important is a “change in normal” for your specific dog. For example, if your dog normally has slightly “soft” stools and is doing well, then all of a sudden develops firm, dryer stools … that could be an indication of a problem. Or visa versa. Or if they normally poop three times a day, and then suddenly start pooping just once a day (without any changes in diet or exercise), then that is a change that should be investigated with your vet. And so on.

What Your Dog's Poo Is Telling You

Whether or not the "poop(ing) characteristics" discussed below warrant a veterinary visit, and how soon, depends on a multitude of factors, including: how long they've been going on for, how severe they are, what your dog's appetite and energy level is, whether or not they're also vomiting, and a host of others. As with most things though, the earlier you catch potential poop problems, the better it will be for you and your dog. So going to the bathroom “together” with your dog – i.e., not just letting them out in the yard to do their business on their own – is an important opportunity for you to keep an eye on your dog’s “inner workings” and pick up on what they might be trying to tell you.

Straining to defecate could be a sign of any of the problems listed below. And, regardless of the reason for a dog’s straining, too much straining, or straining for too long, could actually lead to a prolapse (“popping out”) of their rectum, which itself would require medical attention. So if you notice your dog struggling to defecate, it’s time for a trip to your veterinarian.

NOTE: Sometimes straining to poop could actually be a dog straining to pee. Because of the similarities of their peeing and pooping postures, the difference can be particularly difficult to see in female dogs. Either way, straining to eliminate warrants veterinary evaluation. 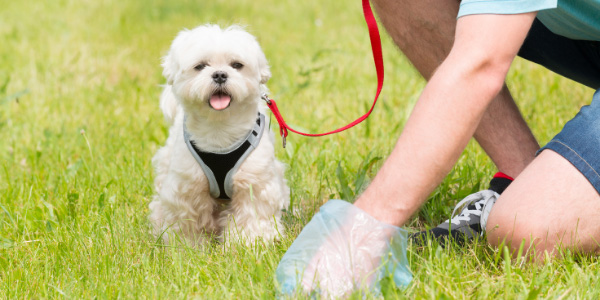 Stools that come out too dry or hard are typically an indication of dehydration or decreased (slow) intestinal movement. Dogs with overly dry or firm stools, regardless of their shape, are at increased risk of constipation and often experience a degree of discomfort when defecating. Chronic dry or overly firm poops warrant veterinary evaluation, and possibly a diet change (food changes should be done gradually).

Stools that come out too loose, watery, or soft can mean that a dog is dealing with one of the problems listed below. Note that the occasional soft or loose stool can be perfectly normal. However, any time a dog is having multiple soft or loose stools, any time a dog is having watery stools, or any “increased softness” of stools that persists for more than a couple of days definitely warrants veterinary evaluation.

PRO TIP: Just like the beds in Goldilocks and the Three Bears, your dog’s poop shouldn’t be too hard or too soft, but rather “just right.” But what constitutes “just right,” you might ask? Generally speaking your dog’s poop should be “formed,” in that it comes out in a “log-type” shape. It should be firm enough to be picked up easily, but not hard or dry. And it shouldn’t leave too much “residue” on the ground when you pick it up. If you’re really curious, and have no problem seeing pictures of different types of dog poop, here’s a handy “poo consistency” chart that will help you know. The Grade 2, 2.5, and 3 stools in the chart are what would be considered "ideal" or "normal" in most situations. How does your pup's poop measure up? 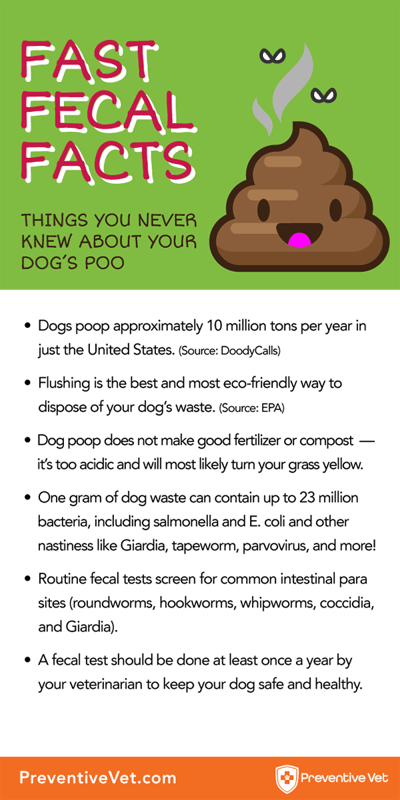 Increased or Decreased Volume of Stools

The amount and frequency of your dog’s poops can tell you something, too:

Generally speaking, dog poop should be a consistent brown color. Though there can be some variation of the shade of brown your dog’s poop is, it really should always be brown. A change in color of their poop could mean anything from a change in diet or eating something they shouldn't have or can't digest to a problem with their intestines, pancreas, liver, or another internal organ. Generally speaking, unless one of the noted color changes below is due to eating grass or carrots, their persistence in more than 2–3 stools (and perhaps even just one, in the case of rat poison or large amounts of frank, red blood) warrant a veterinary visit. Here are some things that different colored poop could mean for your pup.

What's THAT In My Dog's Poop?! 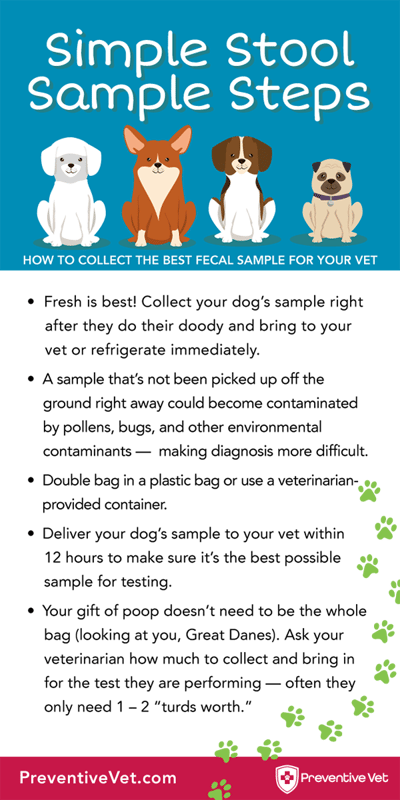 Sometimes you’ll notice things or “stuff” in your dog’s poop that could clue you into what they’re getting up to when you’re not around or even to a medical problem, potentially a very serious problem. So taking note not just of the consistency, volume, and color of your dog’s poop, but also the contents of it, is a great way to get a sense of your dog’s health and habits. Here are some things that you should keep an eye out for in your dog’s poop and what they might mean. Again, whether or not the presence of the things discussed below warrant a veterinary visit, and how soon, depends on a multitude of factors. Always use your best judgement, and when in doubt ... call your vet to ask their opinion.

As you’re hopefully now appreciating, going to the bathroom “together” with your dog is an important opportunity to get a quick picture of their overall health. I hope you’ll take advantage of that opportunity and keep an eye out for what your dog’s poop might be trying to tell you. Whenever there’s any doubt or concern, a check-up and fecal exam at your vet’s office is your best first step.