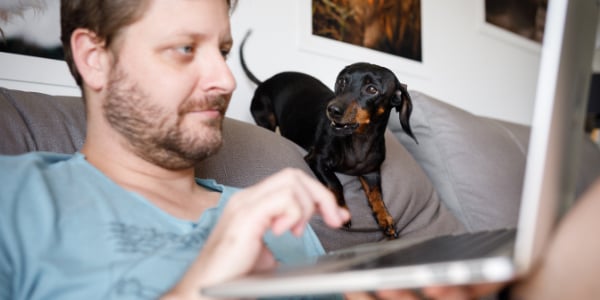 If your dog demands your attention by barking or jumps up on you, you might have seen the training advice to ignore these unwanted behaviors. This is well-intended but incomplete advice – if you only ignore the behavior, your dog will probably never learn to stop barking, jumping, or pulling. Just ignoring unwanted dog behaviors misses an important piece of teaching your dog what TO do instead.

Dogs learn by association. If they plop their rear on the floor when you say "sit," they get a cookie. Since that turned out to be a great deal for them, they are more likely to sit when asked the next time, or even offer more sits without even being asked!

But this association works both ways — if they bark at you and it results in your looking at them or responding in some way, they're more likely to do it in the future. Our dogs are fast learners and masters at reading our body language and can figure out that certain behaviors get them what they want. I always say that dogs can make the best human trainers!

Often, unwanted behavior is in and of itself inherently rewarding for your dog. Most of these behaviors are normal dog behaviors, just not very appreciated by us humans! It might feel good for them to bark or jump on people. More than likely, those unwanted behaviors have always worked for them in the past. Let's look at when ignoring your dog's bad behavior CAN work, so you know how to do it the right way!

When Should You Ignore Your Dog's Behavior?

As you'll see throughout this article, ignoring unwanted dog behavior will only work when combined with effective proactive training. My first "go-to" in any training plan is preventing the bad behavior from happening at all, and then training a replacement behavior. But adding in this ignoring technique can be helpful to communicate with our dogs about what doesn't work anymore.

In my experience, ignoring unwanted behavior works well for:

When You Shouldn't Ignore Your Dog's Bad Behavior

There are some behaviors you don't want to ignore, such as puppy nipping or pulling on leash. Any behavior that feels good to your dog, is naturally calming (such as licking or chewing), or is fun to do is not likely to go away when ignored. Territorial barking or leash reactivity, such as when your dog is barking at the UPS driver when they deliver a package to your front door, are not behaviors you should ignore either, as these can make other people uncomfortable or put them in danger. Let's look at the two most common dog behaviors where I combine ignoring with the rest of the training plan: barking and jumping on people.

Ignoring Your Dog When They Bark

There are many reasons dogs bark, which you can read more about in my article "Why Your Dog is Barking and How to Stop It." Ignoring all barking just isn't going to work. However, if your dog is demand barking in particular, you do want to make sure you're "ignoring" it correctly, so your dog doesn't learn things like:

Here's an example of Finnegan, one of Preventive Vet's office dogs, demand barking:


Ignoring your dog's barking doesn't mean not doing anything though. Use the concept of negative punishment. This means that we take something away from the situation to make a behavior decrease in frequency. For example:

When you start correctly ignoring your dog's barking that in the past has worked for them, you might notice that the barking actually gets worse. This is normal and is called an extinction burst, which I'll explain further below.

Ignoring Your Dog When They Jump on You

If your dog jumps on people, ignoring the behavior can be difficult (and potentially dangerous if you have a large dog or small children). You don't want your dog to learn:

Here again, ignoring this behavior doesn't mean not doing anything. Negative punishment to the rescue again! For example:

You want your dog to make the association that jumping on someone means that interaction with that person stops.

Catching your dog doing the "right" things — the behaviors you want — and rewarding them is more important than reacting to the unwanted behaviors.

What is an 'Extinction Burst'?

An extinction burst is when behavior gets more intense (for barking, this would mean louder and more persistent) before extinguishing itself. A dog who has learned that barking gets any kind of attention, and all of a sudden their owner is not responding to the barking, will bark MORE.

I'll give you a human example. Say you put your dollar bill into a soda or vending machine and push the button to get your soda. Nothing happens. What do you do?

Most people will push the button again. And again. Multiple times. Some might shake the machine, others might kick it — the behavior increases in intensity. We expected our pushing the button would result in a soda! And when that doesn't happen, we increase our button-pushing and more intense frustrated behavior. This "burst" of behavior is our extinction burst, as after we've tried for a few minutes, we'll usually give up and go get our soda elsewhere. We might do the same thing if we hit the elevator call button and no elevator shows up. We'll hit it again. And again. Eventually, we'll just take the stairs after we've reached the end of our extinction burst.

You will most likely see an extinction burst with dogs who have previously been reinforced for barking or jumping when you begin ignoring the behavior correctly. They're working through the process of unlearning the association that barking/jumping = attention.

Why Does Extinction of a Behavior Take So Long?

Something to consider with extinction bursts, for both humans and dogs, is what's called "reinforcement history." If something has worked for a long time, and we've had more experiences of something working for us more than something not working for us, we have a strong reinforcement history. If your dog has been rewarded (even inadvertently) for demand barking or jumping for a long time, or even intermittently, that behavior will be harder to extinguish.

Going back to the elevator example. The next time we want to take an elevator after the previous "unsuccessful" call button, we'll probably try pushing the button first rather than just heading straight to the stairs. Elevators have worked well for us many times before — why would we let one failure of the call button change our expectations? We have been consistently rewarded in the past for pushing the button to call the elevator, so we are more likely to try this first, before just taking the stairs. But — if the button doesn't work for the next five, ten, fifteen times we want an elevator, we'll likely just choose the stair option and skip the button altogether. It takes some consistent "training" for us to learn that the button won't work for us anymore.

The same goes for our dogs. It takes time to unlearn a behavior. If your dog has been rewarded for jumping on you or barking at you in the past, when you begin correctly ignoring the behavior, your dog will still try it out. Don't give in! Training will go so much faster if you focus on proactive training rather than only ignoring the bad behavior.

Waiting for 'Extinction' is TOUGH

In all honesty, it is very hard for us humans to make it through extinction bursts, especially when it comes to barking or jumping. Unless you live in an area without neighbors close by and have noise-blocking headphones, waiting through a barking extinction burst will fray your nerves and make your frustration go through the roof. And if you have a large dog, waiting for them to stop jumping on you is asking for injury.

Did you know that a dog's bark can reach 80–90 decibels? For comparison, an emergency vehicle siren is 115 decibels. Dog barks are loud! Prolonged exposure to dog barking can result in hearing loss. If you are going to wait out loud barking from your dog, invest in high-quality earplugs or headphones to protect your hearing. The Preventive Vet office swears by these Eargasm earplugs – they don't muffle voices and sound but do reduce the harmful decibel levels that damage your hearing. 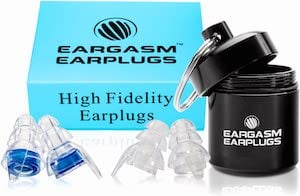 
And if you decide to ride out the extinction wave of a behavior, you must be consistent and not give in!When done correctly and when combined with proactive training, ignoring unwanted behavior can work. However, the time it takes depends on your dog's reinforcement history and their own personal enjoyment of the behavior. For some dogs, they get through an extinction burst quickly, while others can take quite a while. The more proactive you are in capturing an alternative and appropriate behavior, the faster these extinction bursts will be.

This is why I always recommend that you instead focus on learning the why behind your dog's nuisance behavior and then addressing that underlying cause. Set your environment up for success and reward your dog for incompatible and quiet behaviors before they start barking or jumping. Practice lots of positive training for teaching your dog to be quiet when asked and keeping all four paws on the floor. Then you won't ever find yourself riding that extinction burst wave.

You have to make sure you're also frequently rewarding your dog for incompatible alternative behaviors instead! Remember, proactively training what you do want is always better than reactively training against behaviors you don't want.

How to Train Demand Barking Proactively

What's even better than ignoring your dog's demand barking is to prevent the demand barking from happening in the first place. "Easier said than done," you might be thinking. And this can be tough! Take a step back and think about what you'd like your dog to do to get your attention. Is it approaching and sitting quietly? Is it just gently nudging your hand or leg? Focus on training those behaviors, and then pay attention to when your dog is doing them! If you miss the opportunity to reward a wanted behavior first, don't be surprised if your dog takes it to the next level with a bark. Click here for more tips to fix your dog's demand barking. 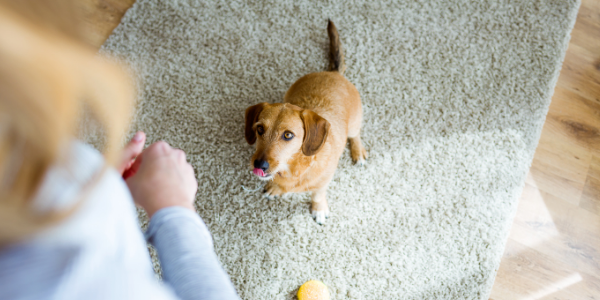 How to Proactively Train Your Dog Not to Jump

Dogs jump on people out of excitement and play (and in rare cases out of anxiety or fear), so it's important to manage the environment to discourage jumping to begin with and teach our dogs what to do instead!

Prevention is always better than trying to corral an excited and happy dog that wants to jump on everyone! Read this article for an in-depth look at how to teach your dog to stop jumping. 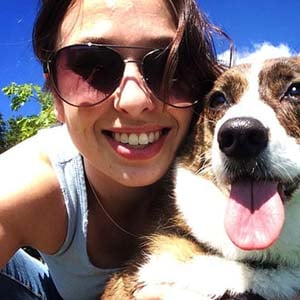