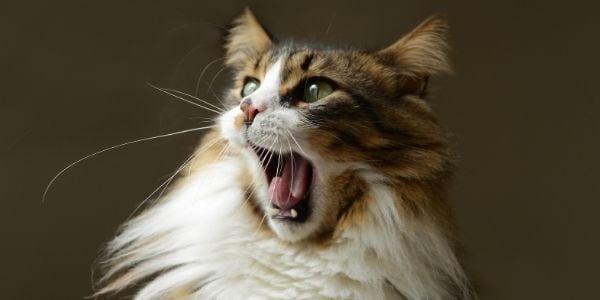 If your cat insists on waking you up at 4 a.m. every day it’s probably because they tricked you at some point in the past and then kept tricking you because you were so easily tricked.

Congratulations, you have been outsmarted by an animal that comes up to your shins and poops in a box in the corner.

The good news is that you’re not alone. Cats are wily creatures who are excellent at training their people to do what they want; e.g., annoying them in the morning for food and attention. The better news is that you can recondition your cat to stop waking you up before the sun rises or raising hell at night while you’re trying to sleep.

Why Cats Annoy Their People in the Morning

The most likely reason that your cat wakes you up in the morning is food, specifically one of two things related to food.

Let’s focus on the latter. There’s a good chance that at some point your cat pounced on you in the morning, pawed at your face, or started knocking things off your shelves. There’s an equally good chance that you gave them food to shut them up so you could go back to sleep. There’s an absolute certainty that your cat noticed this connection and banked the information for later use.

Annoying human in the morning = food

What this all amounts to is your cat playing you like a fiddle. Your cat was hoping to get a reaction from you, and they got it. Actually, they might not have wanted food the first few times — maybe they were bored and wanted to play — but when they realized that annoying you resulted in food, they discovered a new way to score a morning snack.

This problem is so common, we even wrote a song parody about it.

According to certified Feline Behavior and Training Professional Dr. Marci Koski of Feline Behavior Solutions, “Cats are excellent trainers — they know how to get your attention and then once you do the thing that they want you to do, they’re like, ‘Yes!’”

The same goes for a hungry cat. If they think 4 a.m. is a good time for breakfast, they have no reason to think differently if you relent and feed them when they meow, bat items off shelves, and otherwise annoy the crap out of you.

It will take a little patience and a few special tools, but you can recondition your cat to stop annoying you when you’re sleeping.

Training Your Cat to Stop Waking You Up in the Morning 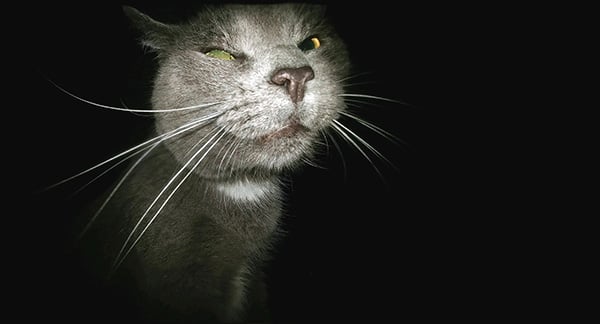 “If you want your cat's behavior to change, YOU must do something to instigate that change,” Dr. Koski says. “You can't just close your door and expect that your cat will do something else — you need to give your cat an alternative activity that they enjoy.”

In other words, you can’t ignore your cat and hope they’ll go away. This doesn’t mean you should cave and reward your cat’s unwanted behavior with food or attention, but you can’t expect them to stop waking you up unless you give them another outlet for their attention.

Use an Automatic Feeder to Recondition Your Cat’s Morning Mealtime 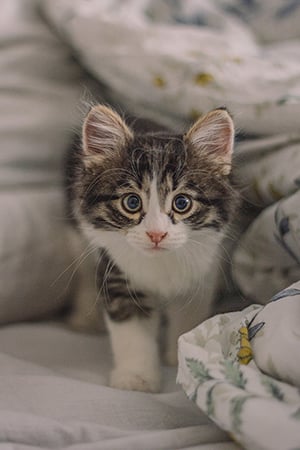 If you’re going to train your cat to wake up later in the morning — or at least not wake you up before the sun rises — you’ll need a way to reward them with food, but in a way that doesn’t involve you getting out of bed, which will only reinforce the unwanted behavior. This is where an automatic feeder comes in.

Using the automatic feeder, you can slowly recondition your cat to expect meals later in the morning.

Eventually, your cat will expect food later and later in the morning (cats are creatures of routine and have fairly reliable internal clocks) and they won’t feel the need to get you out of bed.

When selecting a feeder, you’ll want one that’s easy to clean, reliable, and (ideally) can distribute wet food as well as dry food. (Dry food has less moisture than wet food and can increase a cat’s risk of bladder inflammation, stones, constipation, and urinary obstruction.) It’s not absolutely necessary that you pick up a wet-food automatic feeder, but it can be better in the long run.

Alternatively, you can use the automatic feeder to give your cat dry food in the morning, then feed them wet food by hand (i.e., not from the auto feeder) for their remaining meals. With that being said, here are a couple of our favorite automatic feeders. 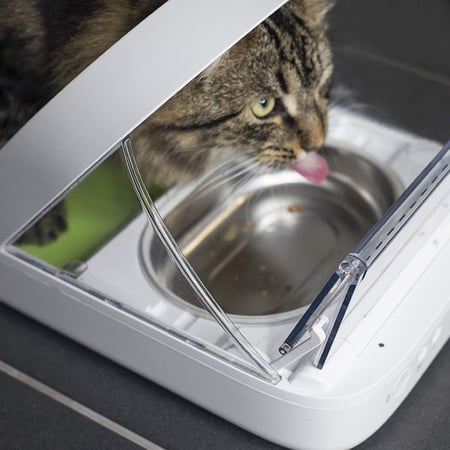 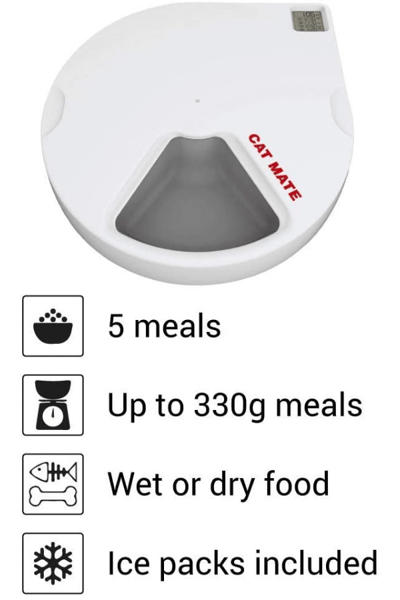 Did You Know?
Outdoor cats can hunt 20+ times a day and eat 7+ meals depending on what they catch. Each one is about the size of a mouse. In fact, their stomachs are only as big as a ping pong ball.

It’s easy to see why feeding more small meals throughout the day can work best for your cat’s physiology and instinctual needs. And just like people, cats get HANGRY.

Going too long without eating can cause stress and sometimes even aggression toward people or other pets. A light meal every 6–8 hours is the perfect solution.

What to Do If Your Cat Doesn’t Respond to Training

If in spite of your reconditioning training, your cat is still waking you up and seems constantly hungry, there might be an underlying medical condition.

Diabetes, hyperthyroidism, and other medical problems can cause voracious appetites in cats. So if your training doesn’t seem to have much effect on your cat’s early-morning wake-ups, your vet can help to get to the bottom of things.

Leave Out Toys and Food Puzzles for Your Cat at Night

If your cat is waking you up because they’re hungry, then you should be able to readjust their morning mealtime using an automatic feeder (as described above). But if the real issue is that they’re bored, restless, or just generally active at night, you need to provide alternative forms of entertainment. 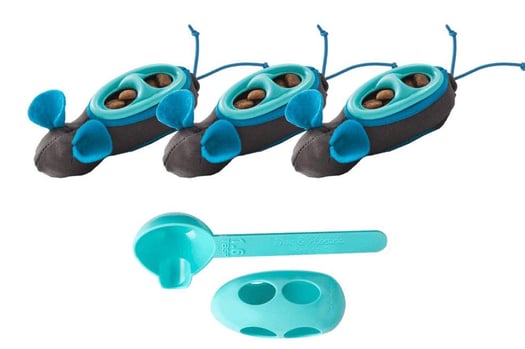 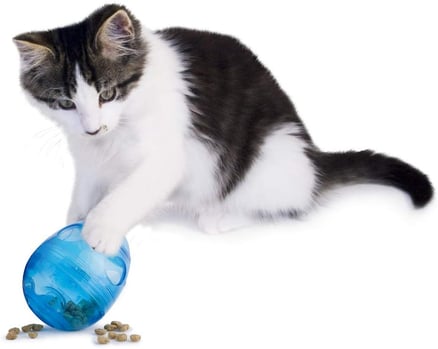 Trixie Activity Board for Cats 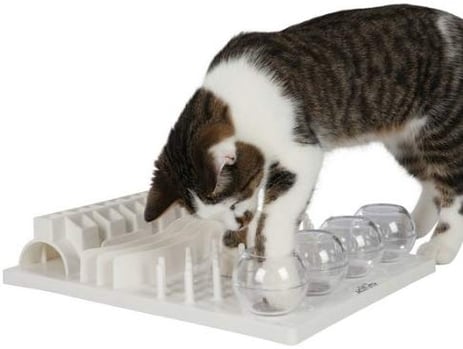 Play With Your Cat Before Bed

To prevent an annoying cat from terrorizing you in the morning, you need to put them back in their normal cycle. For a cat, that cycle is hunt, groom, sleep. Dr. Koski recommends the following to get the most out of playtime so your cat will sleep through the night.

One great toy option is Da Bird, a cat wand that has a variety of interchangeable “lures.” No two cats are the same so you can’t expect that your cat will want to hunt/play with any toy you present to them. Da Bird is helpful because you can swap out lures to find what your cat is most interested in “hunting,” using different lures like feathers, toy mice, insects, and others.

Try experimenting with the lures until you find one that’s best for your particular cat. The more they like the toy, the more they’ll feel like they’ve hunted something, and the less they’ll feel the need to annoy you.

Should You Ignore Your Cat or Lock Them Out of the Room at Night?

Shutting the door and locking your kitty out of the bedroom might work, though they will probably protest for a few nights by yowling outside the door or scratching at it. But shutting the door won’t reduce their boredom. You can shut the door, but be sure that you’ve provided your cat with alternative forms of entertainment, like those mentioned above.

If your cat is hungry, which means their meal schedule overlaps with your sleep schedule, then no amount of ignoring will help. Locking out a hungry cat won’t make them less hungry and they’ll come up with new ways of getting your attention in order to get food.

What’s more, if you kick them out of the room and shut the door when they start to annoy you, they will see that as part of the morning routine. In other words, they will think that if they annoy you, then you’ll kick them out and close the door, then they’ll get fed. (See why it’s important to give them something to do?)

You can also try placing blackout curtains on your windows (not just in the bedroom, but throughout your home). Using blackout curtains can prevent your cat from seeing the sunrise and therefore prevent them from thinking it’s time food or play. However, just like shutting the door and ignoring your cat, curtains alone won’t solve the problem.

Cat Yowling at Night: Should You Be Concerned?

There’s a difference between a cat that’s trying to wake you up in the morning and a cat that’s restless and yowling at night. It could still be a behavioral issue, but there might be an underlying medical cause. Here are some of the most common reasons that a cat might yowl at night. 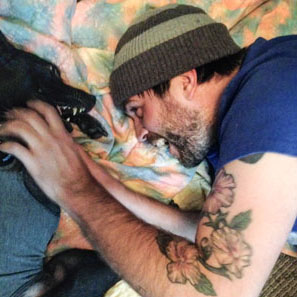