Why My Cats Started Fighting: How to Get Cats to Like Each Other Again 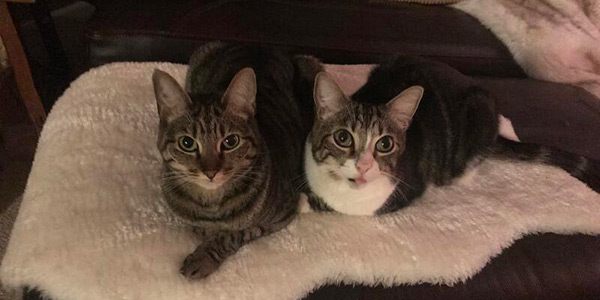 Even the best of friends can be annoying on occasion, forcing us to just ignore their calls. Some of us may even have family that drives us crazy.

So, cats that are familiar can also find a reason to hate one another. That being said, I had never personally watched my own cats getting in – well – a “cat fight." Until recently.

Cats may be more like humans than we realize

We adopted siblings as kittens from a shelter and for the past three years, despite having polar-opposite personalities, they have been very affectionate and at times inseparable. In fact, originally the two were adopted along with a third sibling, but due to a freak accident, we had to put him down shortly after the adoption. A horrible situation and I only mention it because that loss brought our other two cats closer. Again, until recently.

Story Update: For those of you who are familiar with this blog, you know my two cats have been in an epic battle for more than six weeks. However, we may have finally turned a corner. If you aren't familiar with this tale, read on. But if you've been following our progress, click here to see how the kitties are doing now!

What Started My Cats Fighting

Around 3:45 in the morning, I was startled by a heavyweight fight, followed by what sounded like two rhinos running up and down the stairs of our house.

My wife was already getting ready to leave for work (I know, early right?) when we had to take the time to separate the cats. I had never heard them hiss at one another, let alone growl.

I was at a loss. I had no idea what to do and started hypothesizing that maybe, the boy, Rajah, had gotten into something and was having a mental breakdown. Specifically, I had recently put gel packs in our closets to absorb any moisture and started to question whether he had consumed the toxic packets. Obviously, that was not the case since I had placed them in areas the cats couldn’t access, but you know how the mind wanders.

Although we hadn’t yet had a chance to rule out anything going on medically, the cats when separated acted completely normal. Anytime something happens for the first time in your life, you naturally believe you’re the only one to ever have the experience. Just ask any parent. We all think our situations are unique until we actually talk to others or take a peek online. 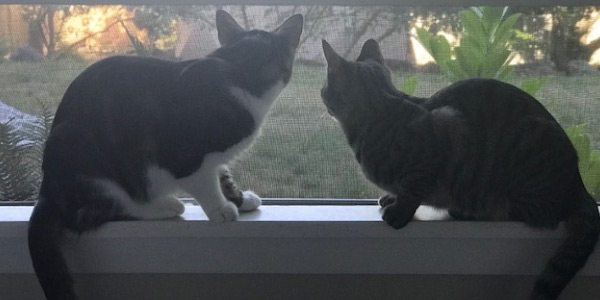 Tips for Behavior Changes in Cats:

What Was Causing My Cat's Aggression?

And that’s what I did, but what I found was there wasn’t a whole lot of information that explained what would have caused this new behavior between previously affectionate siblings.

After some research and talking with the shelter where we adopted them as kittens, we found that the cats may have had an experience that led to a misunderstanding. This was confirmed after talking with Dr. Marci Koski, certified feline behavior and training consultant.

Dr. Koski explained that sometimes an inside cat can have a “perceived” threatening experience, such as seeing another cat or strange animal outside. At the same time, your other cat passing by carefree can send the wrong message to the threatened feline. That aggression is then transferred to the carefree cat just chilling and minding their own business.

If you’re like me, I was asking, “What? This can’t be true!” Apparently, it’s not that uncommon for felines, who have been familiar with one another, to have some traumatic event reshape the way they look at one another. Friends turned foes overnight. Or, in their case, it’s literally a family feud. So, I decided I needed a plan of action, and with the help of Dr. Koski, here’s how we started.

Separating Your Cats Can Reduce Their Agitation

First, we had to separate the cats into two different rooms because we didn’t want to risk injury to either cat. As Dr. Koski suggests (if you have the means) keep your cats separated with a gate meant for babies or pets.

We found this gate worked well for our cats and kids for years. Of course, if you need a gate that’s higher because you have a leaper, a wire mesh gate can be a great choice.

Trust me, they won't get through and it's tough to jump over (I used it in our garage). However, we had to ditch the gate plan, because our kids are younger and not very reliable to keep them shut.

We are fortunate to have an upstairs and downstairs, so each cat has their own level with all the amenities they would need. What’s good about this separation is that you can monitor if your cat is not eating, how much water they are consuming, and any bathroom habits. This is important, because there may be a medical reason behind this sudden change in behavior, for at least one of the cats.

Having Your Cat Checked by a Veterinarian 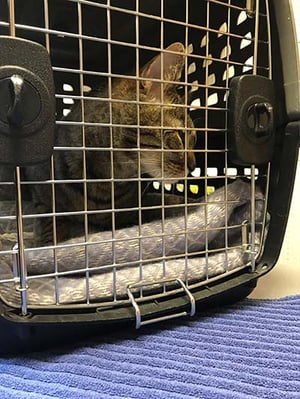 After we separated the cats, we took them to see our veterinarian and got them checked out. I was convinced that the girl, Zsa Zsa, had a urinary issue, which I believed Rajah looked at as a weakness and thus created his aggressive behavior.

Now, I was trying to figure out if this development created the riff or was a symptom of it. Rajah's urinary tests came back clean and Zsa Zsa was sent home with medication and quickly recovered.

I have since changed their diet primarily to wet food, which our veterinarian recommended to help avoid future mineral crystals forming and the potential of an actual urethral obstruction.

Questions? To chat with a veterinarian about fighting between your cats, Click here

Providing enriching experiences for your cat doesn’t have to require a lot of time, effort, or money. And providing an enriching experience within their environment was the first step we took. One of the first suggestions Dr. Koski made was pheromones to help keep our cats chill. If you have a larger home, I recommend the starter set from Comfort Zone Multi-Cat. It comes with three diffusers and six refills, which we needed with each cat on separate levels of the home.

However, if you are in an apartment or smaller living space, you may not need multiple diffusers, in which case Feliway’s Multi-Cat Starter Kit is perfect. 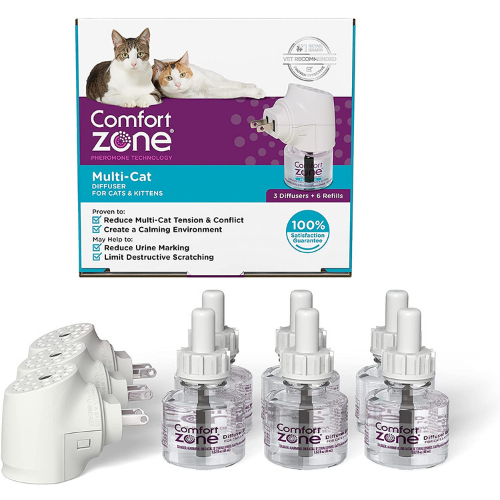 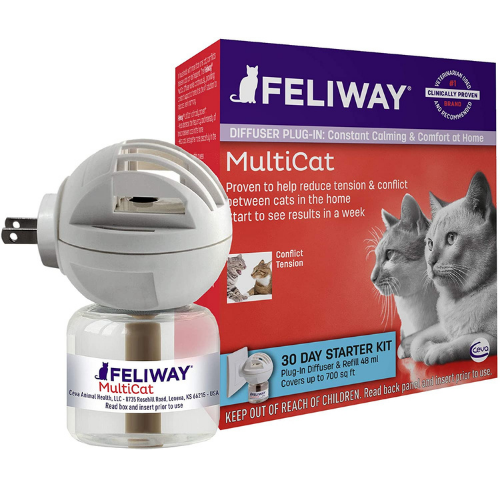 
How Long Before the Cats Can be Reintroduced? 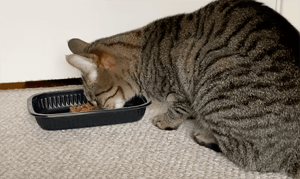 Our house was now set-up for success, but what are we supposed to do with the cats? The ultimate goal is to get them back to normal because (let’s face it) separating them is a major inconvenience to the household and can be incredibly stressful on both cats.

First, Dr. Koski recommends feeding your cats at the same time but separated. Put their food on each side of a door and leave the door slightly ajar. The cats are able to see one another while eating but cannot necessarily get close to each other. 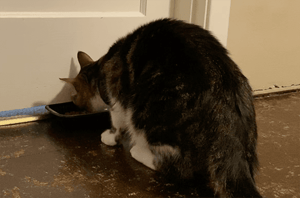 Without getting into a long-drawn-out story, we weren't able to feed the cats with the door open because of obstructions that would keep them from seeing each other anyway. So, we chose to place a bowl on each side of the door so that each cat still gets the scent of the other while having a good experience of eating.

Again, this experience helps the cats associate something good (food) while being around the other and also serves as a distraction while near one another. Second, swap the cats out occasionally from each space. We swap the cats in the morning and early evening every day. This allows them to catch the scent of the other, whether it’s in the bed or litter box they are using. Check out our daily routine of swapping the cats out below!

After several days of doing this, you may be ready to reintroduce the cats to one another. In our case (as previously shared), it's been more than a month and a half. You can always crack the door between the cats and just monitor the meeting. If it seems that each are curious and seem relaxed, try having them mingle without barriers.

I suggest bringing both into a room and hold or leash the cat that’s the aggressor (only if they’re harness trained) to have a little more control. Unfortunately, in our case, the cats were able to escape their private living quarters a couple of times (our kids have been great, but accidents do happen) and resumed the hostility towards one another.

It’s also gotten to the point that Zsa Zsa has urinated out of fear. I’m not sharing this to say your cats won’t become friends again, but rather to emphasize, that sometimes it can take time.

Dr. Koski stresses that some situations figure themselves out in a week, and others could take months. Which was the case for us, but as I said at the beginning of this blog we may have finally turned a corner!

Update: All of the Work...Works!

So where are we at now? After weeks of keeping the two separated we finally re-introduced them slowly and we are really hopeful that life may go back to normal. Brief engagements of course, but after increasing their mental stimulation with cat toys while in the same room, we began to see a real difference in their behavior. So, what we believe happened after six weeks was the combination of several key factors in their turnaround.

First creating a calm home is always difficult with two young kids, but there seemed to be a marked improvement in their demeanor when we used pheromones (Comfort Zone Multi-Cat). We also had them separated in the house and switched them out twice a day (video above), so that they would experience the other's scent.

We also wanted to make sure there wasn't a health concern. So we had our veterinarian do a urinalysis on both and while Rajah's tests came back clean, Zsa Zsa had formed some urine crystals and was put on antibiotics for a suspected urinary tract infection.; Lastly, (and surprisingly) the most important step in eventually reuniting the siblings was the mental stimulation. I don't believe that boredom led to their misunderstanding, but I do think getting them new toys helped stimulate their physical and mental muscles and created a safe space for them to interact.

It's not all sunshine and rainbows, because cats don't just immediately forget that hostility, but it's amazing that these two can be in the same room without hissing and going feral on each other!

Check out a little bit of their reunion below. It's important that what works for some may not work for others. Time is your friend, and just when you want to give up, you might be surprised at the outcome.

Chris Boicelli is a contributor to Preventive Vet’s website. Having spent two decades producing television news, he finds Preventive Vet’s mission of education very rewarding. He lives in Seattle with his wife and two kids and is caretaker to two family cats, Raja and Zsa Zsa. There could be a dog in their future, but it’s still being discussed. Raja and Zsa Zsa are currently against the idea.