#IfOnlyIKnew: Why Laundry Soap Should Make You Pause 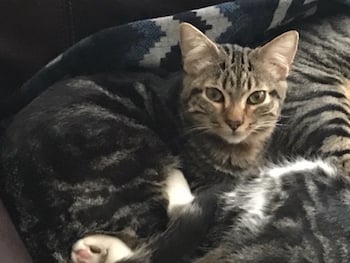 Growing up in rural America, having animals around was as common as a bowl of cereal on a Saturday morning. You didn’t give it a lot of thought, it just felt right. Cats were the pet of choice in my family.

In fact, I don’t recall a time where we didn’t have a feline walking the hallways of our home. I do recall our cat Candy giving birth to a litter of six inside one of my dresser drawers, ruining my favorite train shirt.

That’s a story for another time. The point of all of this is that cats have always and continue to be an integral part of my family. However, recently I wondered that if pets are part of my family, have I been concerned about their well-being as I would my child?

When we make the conscious decision to be responsible over someone or something, we owe it to them to do our very best. I’ll admit it wasn’t until recently that I realized that I should have been protecting our cats in the same way that we protect our young children. Both are very curious and that can sometimes lead to devastating events.

My story begins in 2017, when my mother-in-law Kim’s stomach cancer had aggressively returned leaving my wife in complete anguish. Despite Kim’s zeal, she eventually lost her battle with cancer in the spring of that year. It was a difficult time and only got worse. Shortly after my mother-in-law’s passing, our cat of 12 years was diagnosed with the same type of cancer. Puss Puss died two weeks later. Loss is never easy and when it’s compounded, it’s nearly impossible to recover.

My wife is an incredibly strong person, but I figured there’s nothing wrong with trying to ease that grief with a little fur. So, I decided to bring home three kittens, yes three!

All siblings. Despite having cats and litters of kittens through my adolescent years, I had never ventured to take care of three kittens, now that I was an adult. How hard could it be? It just means more litter boxes, more food and more scratching posts, right? While my basic evaluation was correct, I soon learned a very hard lesson which changed the way I care for our pets.

There’s no perfect word to describe our home at Christmas other than festive. We have a tree in every room and set-up starts at least a month in advance. You can imagine the mess that comes with hauling out all that décor. It was in that oblivion that we became careless with three kittens in the house. The female of the group Zsa Zsa, is a jumper. She loves heights and is constantly testing the limits of her leaping abilities.

One day, she got trapped in the laundry room where we had boxes and decorations strewn all over the place. The next morning, we were in a rush to get out the door for some event when we realized we hadn’t seen Zsa Zsa so we searched the house and eventually found her in the laundry room.

Nearly slipping, I discovered a massive puddle of liquid laundry detergent on the ground so thick it wasn’t going down the floor drain.

While alone in the laundry room, Zsa Zsa had climbed up on the highest shelf where we keep our laundry detergent, knocking it all over the floor. I wanted to shut the door and deal with the mess later but that’s when I noticed Barry, Zsa Zsa’s brother, acting lethargic and weird, panting and drooling. I’ll never forget how sick he looked.

We found that his paws were covered in liquid detergent. He had walked through it at some point before we were aware of the potential hazard. The fear that takes over in the moment when you realize something is really wrong can be so overwhelming.

Barry had been in the laundry room a couple of minutes at most. We knew that he had ingested something considering the scent of detergent was all over his nose and mouth. My wife feverishly washed him off in the sink, but we knew the damage had been done. We immediately checked the other two cats, who remarkably avoided the toxic spill.

We canceled our plans and struggled to find a way to explain to our children what was happening. We rushed Barry down to the emergency veterinarian, terrified we were going to lose one of our cats right before Christmas.

Apparently, as I've since learned, liquid laundry detergents often contain a variety of surfactants and other compounds that can cause irritation and chemical burns to a cat's skin and mouth, and severely irritate and damage their respiratory system, too. And our cat had clearly just consumed a rather large amount of the stuff, and it had clearly gotten into his lungs, too. 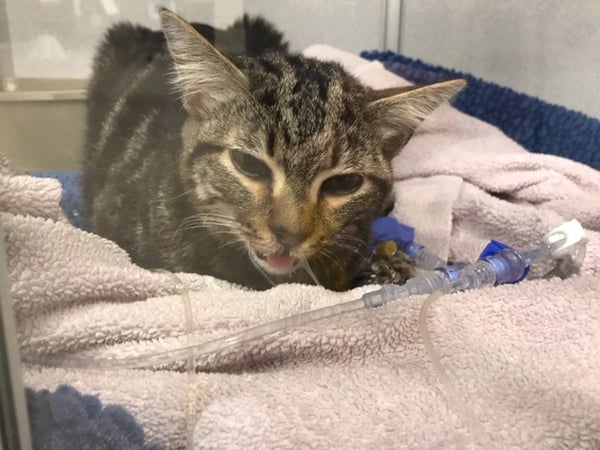 Thousands of dollars later and countless painstaking decisions being made while he laid in intensive care, Barry’s condition continued to deteriorate – he wasn't eating, he was still having trouble breathing, and the damage to his lungs wasn't showing any signs of improving.

My wife and I decided after more than a week of waiting for some sign of hope, that it was best to ease his suffering and let him go. Barry wasn’t even a year old. Just writing this brings all of those memories flooding back and makes me emotional. He was just a kitten and we failed him.

His death was preventable. That was the number one takeaway for me following our loss. Our failure was the direct result of not even considering securing those cleaning agents, despite being in an elevated area. Every parent baby-proofs their home at the time their newborn transitions into a toddler, hoping they are prepared for any scenario.

Consider that cats, like kids, are curious by nature and much more mobile. We had not prepared our home well for three cats. What if our son had walked in there and somehow ingested the soap? And now that manufacturers are producing detergents in compact and attractive pods, the potential risk to both children and pets is greater.

Not only are these detergents even more concentrated, which means higher potency of the toxicity, and also under higher pressure, meaning that they're more likely to get ingested or inhaled when punctured, but the colorful packaging and pleasant smell can be highly attractive to both as well.

Granted our veterinarian explained that our experience is rare, but that loss has opened our eyes a little wider and given us a deeper appreciation for pet ownership and the responsibility that comes with it. We've made changes. We've since switched our detergent to a safer plant-based solution, but regardless the result would have been the same.

In order for laundry detergents to be effective at removing odors, grease, and other stains, they must contain surfactants, a dangerous compound when ingested or inhaled. (As I've recently learned Preventive Vet has been encouraging cat owners for years to properly store dangerous products, in this Top 10 Pet Proofing Tips for Cats and Kittens article. It's part of Tip #7.)

We now use Ecos liquid detergent, which is made primarily from plant products and does not use dyes, optical brighteners, parabens, phosphates or phthalates. This of course is not a safe solution, but much less attractive than compact and fragrant pods.

Another popular brand is Seventh Generation, also made with plant-based products and free of any dyes or fragrances. More importantly, all of the containers which sit on a wire shelf just above the washer and dryer are now strapped down by way of bungie cords that are looped through the handles and over the top. And when the laundry room is not closed up, it remains clean of any debris or potential hazardous situations for either our pets or children.

As fortune has it, I now have the opportunity to share my story and the power of prevention as the newest member of Preventive Vet. Before joining the team, I had no idea that all of this incredible information was available on one site, like the extreme danger lilies pose to cats, or that cats can get heartworms.

Working in media for the better part of two decades, I’m excited about our unlimited potential to touch so many pet owners and help them better protect their pets. The message is clear, awareness and prevention are paramount. And despite being devastated over this loss, our family has risen with a greater purpose and stronger resolve for the loved ones we still have in our lives.

Chris Boicelli is a contributor to Preventive Vet’s website. Having spent two decades producing television news, he finds Preventive Vet’s mission of education very rewarding. He lives in Seattle with his wife and two kids and is caretaker to two family cats, Raja and Zsa Zsa. There could be a dog in their future, but it’s still being discussed. Raja and Zsa Zsa are currently against the idea.