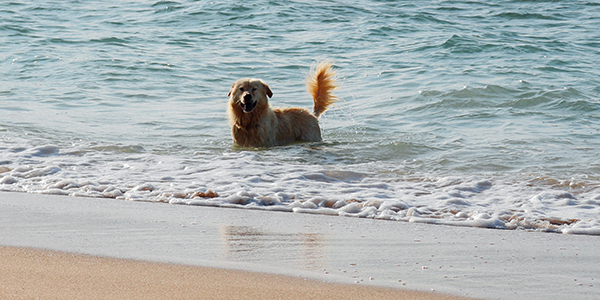 Swimming is a great form of exercise and entertainment for your dog. And if you live near a body of water such as a river, lake, or ocean (or are visiting one), the water can provide hours of fun for you and your dog.

Does your dog know how to swim?

It’s a good idea to get your dog used to the water at an early age, since not every dog naturally knows how to swim. You can help your pup get comfortable with the water by introducing them to it early and safely — whether it be in the local lake, at the beach, or even a pool in your own backyard. Learn more about teaching your dog to swim.

Water can also carry its own share of significant hazards for dogs that you should be aware of and keep an eye out for to prevent problems. Below is a list of the most common and serious water and swimming-related hazards for pups swimming in rivers, lakes, and oceans. After all … knowing is half the battle!

Hazards in Rivers, Lakes, and Oceans

Every year, many dogs drown or suffer from “near drowning” (a.k.a. “dry drowning”) events when they get water in their lungs while swimming and then suffer inflammation, infection, and other problems because of it a few to several days later. And it’s not just novice swimmers or those in rough oceans and lakes. Dogs get water in their lungs in ponds, lakes, rivers, oceans, and even backyard pools. Read how Sparky was saved from drowning twice in one day.

When your dog is playing in the water, keep the water temperature in mind, since they will tire out faster the colder the water is. If your dog doesn’t have an off-switch, make sure that you’re watching their energy levels and stopping play when your dog shows the signs of exhaustion. 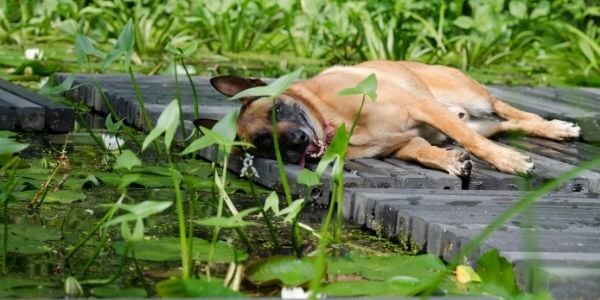 If you’re not yet familiar with harmful algal blooms (HABs) and your dog spends any time in the water (or you yourself do), please take note of these and learn to recognize and avoid them. HABs, like red tides and blue-green algae, can cause serious, debilitating, and even fatal problems for pets and people alike.

Check out our article all about Blue-Green Algal Blooms and how to spot them.

Rip currents (sometimes erroneously referred to as “rip tides”) are powerful and dangerous currents of water that run perpendicular to and away from shore. They have carried both pets and people out to sea, some with tragic results. Contrary to what some people may believe, rip currents don’t just happen in the ocean. They can occur in any body of water with breaking waves – so not just oceans, but even larger lakes, like the Great Lakes. Be careful and learn how to recognize and escape rip currents, as warning signs aren’t always posted.

Please know that dogs caught in rip currents often survive them just fine. They just seem to have an innate knowledge of how to get out of them … or perhaps it’s their strong swimming abilities or calmness and lack of panic that lets them ride it out and then return to shore. What has sadly happened on more than a few occasions though is that a dog’s person jumps in to try and save them from the rip current, only succumbing to the rip current themselves while their dog rides it out and calmly exits. 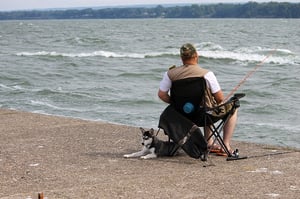 If your dog is swimming while you or anyone else around you is fishing, take precautions to help ensure that the “catch of the day” isn’t your dog! Plenty of dogs wind up at the vet with fishing hooks embedded in their nose or tongue, and it’s also not rare to see a dog that’s swallowed, well … hook, line, and sinker. So keep your dogs away from your tackle box and whatever you haul in. And, speaking about sinkers … if you’ve got any lead sinkers lying around, you’ll want to be extra careful of those, as they can cause lead poisoning should your dog be mischievous enough to swallow one (or several). 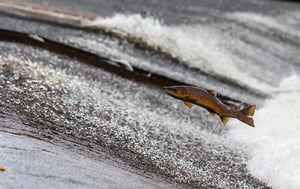 Speaking of fish ... if your dog is playing in or around the salmon-containing waters of the Pacific Northwest of the US or in British Columbia, Canada, you’ll want to keep a close eye and prevent them from gobbling up any salmon that may have found their way onto the shores. This is because salmon, and other salmonid fish (incl. trout, char, and others), in these parts of North America can contain a type of bacteria and a parasitic fluke (a kind of worm) that can cause a condition in dogs* (not-very-creatively) called salmon poisoning disease (SPD). Dogs with SPD can develop a fever, enlarged lymph nodes, and debilitating diarrhea and vomiting. While some dogs with SPD can be treated conservatively on an “outpatient basis” (i.e., don’t have to be admitted to the hospital), those with severe diarrhea and vomiting that prevents them from holding down food, water, and oral medications need to be admitted to the animal ER for effective treatment.


Swimming is a fun way for your dog to get great exercise, especially in the warm summer months. Now that you’re aware of the most common things to look out for when your dog is swimming in rivers, lakes, and oceans, you and your dog can enjoy hours of fun in the sun this summer! 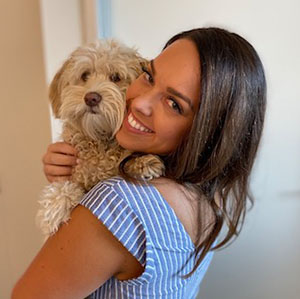 Marissa Busch is a Content Marketing Specialist that gets to combine her love of animals and writing to contribute to the Preventive Vet blog. She lives in Seattle with her husband and miniature Goldendoodle Mary Berry. When she's not working, Marissa can be found training for half marathons, exploring dog-friendly breweries, or experimenting with a new baking recipe.