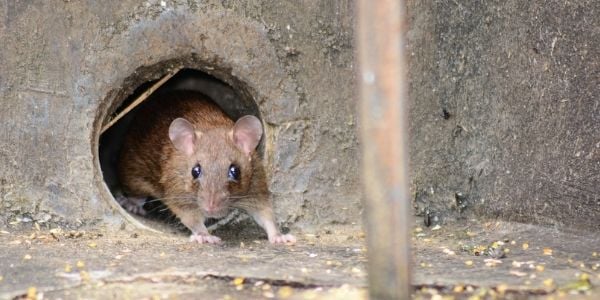 Rodenticides: many cats and dogs will be the first to take the bait

Whether taking advantage of leftovers at bird feeders or trash cans, or when declining temperatures force rats and mice to seek shelter in our homes, garages, sheds, and barns, they can easily become a nuisance.

To combat this, many people will put out rodenticides — chemicals and “baits” designed to kill rats and mice.

Unfortunately, cats and dogs will often be the first to take the bait. And as if that weren't enough, they can also be affected by eating poisoned rodents! Signs of rodenticide toxicity can be seen within hours to days, depending on the type of rodenticide used.

Possible signs of rodenticide poisoning in dogs and cats

A pet's particular signs will depend on the type of poison eaten (the active ingredient) – as well as the amount eaten, the pet's weight, and the amount of time that has passed since they ate it. If you notice any of these signs in your pet and know or suspect that they may have eaten some rat or mouse bait immediately call Animal Poison Control or take them to a veterinarian for evaluation. Time is truly of importance with rodenticide poisonings. 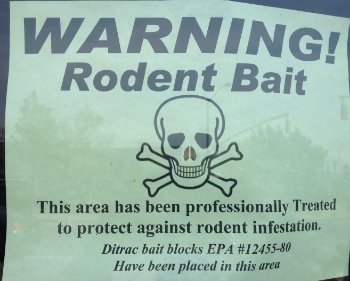 Even if you're not seeing any of these (or other) clinical signs in your pet, if you know or suspect that they have gotten into a rodenticide, you really do need to immediately call Animal Poison Control or take them for evaluation by a veterinarian.

Rodenticides are very good at their "job"... killing. And these compounds don't care whether they're in a rat/mouse or your cat or dog, they are indiscriminate killers. The sooner you get your pet the veterinary attention they need, the better the odds of their survival.

Even if you’re not using rat and mouse poisons in or around your home, exercise great caution with your cats and dogs this time of year, as your neighbors or even your local parks department and businesses may be doing so. And keep this in mind too when traveling with your pets, as some hotels or rental homes may use rodenticides inside or on their grounds! Pets can also be affected by eating poisoned rodents!

All rat and mouse poisons are not the same

While many of the more common rodenticides kill by causing prolonged bleeding, not all do! Some kill by causing kidney failure, while others kill through their devastating effect on the cellular metabolism throughout the body. This difference in "mode of action" is extremely important, as they each carry their own prognosis and require different treatment. Check out this article for more information on the differences (i.e., how they kill) between the various types of rodenticides.

Tips to help you protect your pets from rodenticides: True Story – "Tail of Woe": I once treated a family's TWO Jack Russell Terriers for inadvertent rat poison ingestion after the dogs discovered and ate the blocks of rat poison that had been laid out by the previous owners and left behind under the deck of the house the dog's people had bought just two weeks before. Fortunately, they both survived, but it was touch and go and certainly took a toll –– both financially and emotionally –– on the dogs' family.

Rodenticides are indiscriminate in who or what they kill. So please, if you use them, do so only with extreme caution and take the steps necessary to keep your cats and dogs safe from their potent effects.