Puppy Versus Paper Shredder: The Tale of Henri's Tail 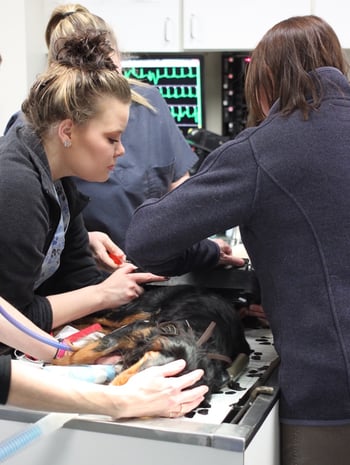 Henri was just 10 months old when he encountered a powerful enemy that changed him and his owners forever.

The day of the accident, the Cavalier King Charles Spaniel was visiting a Tipp City, Ohio-based business where his mom and dad worked. With his charming personality, adorable puppy face, and handsome black-and-tan coat, Henri was the star of the show.

After making the rounds, he stretched out on a chair with his plumed tail draped over the edge of the seat — right in the path of the office’s paper shredder. Unfortunately, the machine was plugged in and set to “standby” mode.

Sensing a nearby object, the sharp teeth started turning and grabbed onto Henri’s fur. In seconds, his tail disappeared into the fierce mouth of the paper shredder.

In a panic, the office staff called 911 — which, in turn, called Tipp City Veterinary Hospital. Surprised to receive a call from 911, the experienced hospital team quickly assembled a medical kit so they could provide emergency assistance on site. Veterinarian Dr. Susan Dextradeur, veterinary technician Rachel Morrison, and technician student Kinsey Douglas drove directly to the nearby business. They arrived to find Henri’s horrified dad, along with responders from the Tipp City Fire Department, trying to take the shredder apart.

“Henri was stable but his heart rate was elevated, and his eyes were big and anxious. He was clearly stressed and in pain.” – Dr. Dextradeur

Amidst all the chaos, the frightened dog seemed to realize that whenever he moved, the pain got worse. So Henri remained still and let the humans take care of him. After providing pain medication and sedating the puppy, the team was able to examine his injury more closely. “The tail area doesn’t have a huge blood supply, so bleeding was minimal,” explains Dr. Dextradeur, who has more than 20 years of veterinarian experience. “But we were concerned about damage to the nerves in the back end because of the weight of the shredder.”

Warning about images: Some of the photos below depict details of Henri's injury, which may be upsetting to view.

Dr. Dextradeur and her staff transported the little Spaniel — with the shredder still attached — to the hospital. “His tail was a mess,” she says. “The skin and tendons were literally shredded.” Without any viable tissue left, the tail would need to be amputated. Henri’s parents were distraught.

After trying once again to take apart the jaws of the shredder and having no luck, the team prepped Henri for surgery. The machine presented a couple of challenges. "Because the heavy shredder was still attached, with only three inches of tail spared, very careful balancing was required," the veterinarian says. "Also, the shredder didn't provide a sterile environment for surgery."

"To make sure we had healthy skin and a good blood supply, we had to amputate above the compromised tissue." – Dr. Dextradeur

An hour later, Henri was out of surgery — his sutured tail now measuring only one inch. After a night in the hospital, Henri was sent home with a supply of anti-inflammatory and pain medications to keep him comfortable. Two weeks post-operative, he was healing well. His owners reported that Henri was more active, and his appetite had picked up. At his last visit, he was back to his playful self and was able to sit without any trouble. 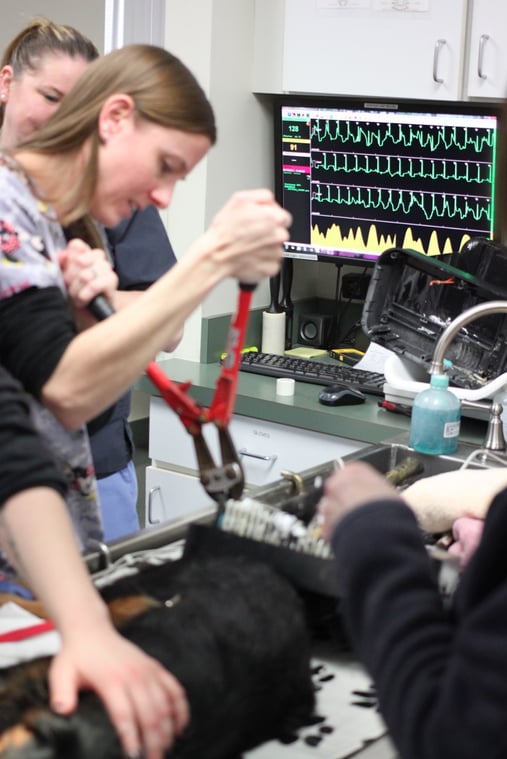 The Tipp City Veterinary Hospital team tries in vain to dismantle the shredder while Henri is monitored. 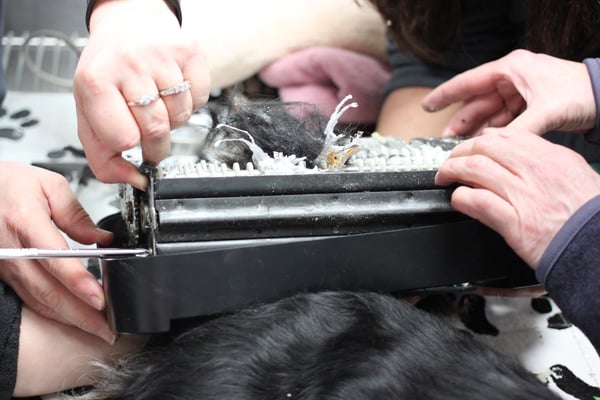 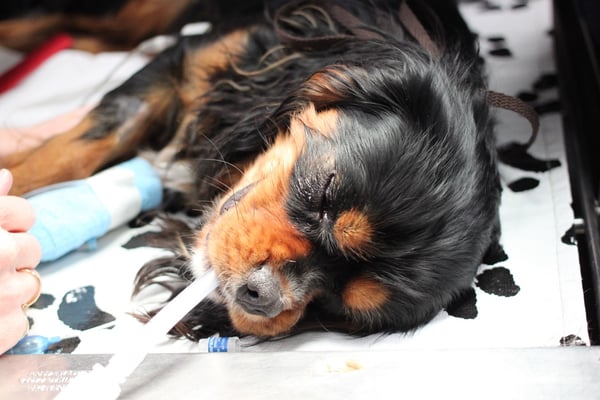 Henri undergoes his tail amputation. (What a trooper!)

Although losing that long, silky tail hasn’t affected the way Henri gets around, it’s impacted the way he interacts with the world. Dogs use their tails primarily to spread their scent and communicate their feelings — excitement, happiness, curiosity, insecurity, stress, fear. Because Henri's tiny tail is more difficult to "read," his owners have to pay closer attention to other signals, such as his body stance and the position of his ears.

The end result of the devastating accident.

“Knowing how fast a gruesome injury like this can happen,” Dr. Dextradeur says, “I urge owners to keep their pets out of the room when using shredders and to keep them unplugged when not in use.

Cats are incredible climbers and love to jump and perch on objects — including the top of a warm paper shredder that’s turned on. These machines have caused serious injury to kitty tails, feet, ears, and tongues. Long-haired cats are also at risk of getting their fur caught in the teeth of a shredder.

To learn about other dangers your pooch may encounter at the office, be sure to check out our article on Bringing Your Dog to Work, How to Do It Safely.

As a longtime copywriter and content writer, Keri has penned everything from coffee packaging and bank brochures to hotel websites and non-profit newsletters. She loves writing about animals, most of all, and is delighted to be a part of the Preventive Vet blog team. When not at her computer, Keri is either knitting a sweater, reading a mystery novel, taking a road trip, or curled up on the sofa with her husband and their blue-eyed chocolate lab mix.