Causes of Bloat (GDV) in Dogs 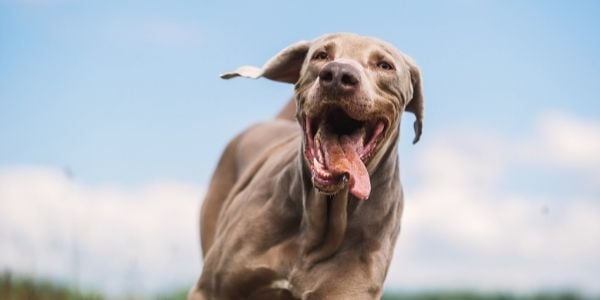 Bloat, also known as GDV or Gastric Dilatation Volvulus, is a serious condition primarily seen in large, deep-chested dogs and is considered a serious emergency in veterinary medicine.

Therefore, if you believe your dog is suffering from bloat, please take your dog immediately to a veterinarian for assessment.

What Can Cause GDV?

Research is ongoing; therefore, all of the possible causes or contributing factors are unfortunately still unknown or under investigation. However, although there is still much to learn, we do know that several factors may contribute to one dog developing GDV over another, including the causes listed below. 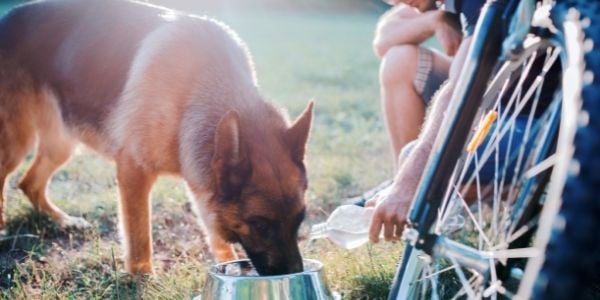 Read about preventative measures you can take to help your dog avoid these issues and an incident of GDV.

As with most animals, with age comes an increase in the development of various diseases. And this is no different when it comes to GDV/bloat.

In one recent study, dogs aged above 7 years old were the highest risk group for developing GDV. This study indicated that this was perhaps due to an increase in comorbidities experienced by older dogs, particularly those involving the gastrointestinal system, such as inflammatory bowel disease (IBD)) as well as a slowing down of their gastrointestinal tract (decreased gastric motility) and decreased gastrointestinal tone, resulting in a greater amount of gas build-up, which is a pre-requisite to the development of GDV. Additionally, ligament laxity increases with age. If the hepatogastric ligament that holds the stomach in place becomes laxer as a dog ages, the greater the ability the stomach has to rotate on itself, resulting in torsion and GDV.

Uncomplicated bloat is when the stomach fills up with gas but doesn't twist (dilatation without volvulus), and this has been reported to occur more commonly in elderly smaller breed dogs. Again, these facts were extrapolated to be due to the decreased motility and tone of the gastrointestinal system in older dogs resulting in a greater gas build-up, as well as increased comorbidity being suffered by dogs over the age of 7 years.

Bloat/GDV can happen to puppies

Unfortunately, puppies are not completely in the clear when it comes to GDV/bloat. Some puppies inhale their food at a pace equal to that of a land-speed record, resulting in the inhalation of larger amounts of air. And they're notorious for gorging themselves on water (it’s a game for most puppies!) and then running around at all hours – before and after eating – despite our best efforts at controlling this. Although puppies, from the age when we first bring them home to around 1 year, are less likely to suffer from GDV than dogs over the age of 1. The reasons are that they are likely to be suffering from less (if any) comorbidities and their superior gastrointestinal motility and tone compared to that of older dogs.

Some Dog Breeds Are at Higher Risk for Developing GDV 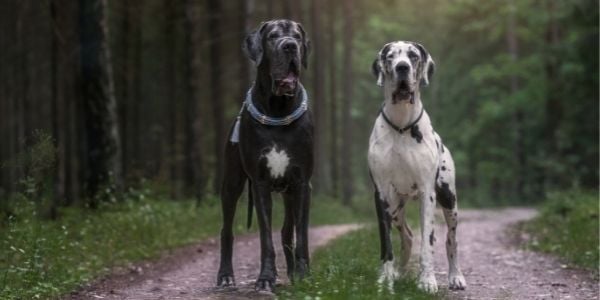 A dog's breed is known as the most significant risk factor when it comes to which dog(s) may suffer from GDV. Theoretically, any dog can suffer from GDV/bloat; however, typically, dogs that are at higher risk for developing GDV are large and giant breed dogs and those with deep or barrel-shaped chests.

Although this isn't an exhaustive list of all dog breeds that may suffer from GDV, it is instead a comprehensive list of the most common breeds bloat typically affects:

In a recent study, the three most likely breeds at risk of bloat were the Great Dane, Saint Bernard, and Weimaraner. However, it must again be noted that ANY dog or dog breed can develop GDV/bloat, including small breed dogs such as Shih Tzu’s, Pomeranians, and even Chihuahuas.

It must also be mentioned that mixed-breed dogs can and do suffer from GDV/bloat as well; however, their risk of developing GDV is lower than that of pure-bred large breed dogs such as those listed above. This is likely due to their genetic makeup decreasing their predisposition for this condition.

Many veterinarians will recommend to pre-emptively surgically ‘tack’ a predisposed dog’s stomach to the stomach wall, known as a ‘gastropexy’ or ‘pexy’ surgery.

If you are the owner of a Great Dane, German Shepherd, Weimaraner, or similar breed, this surgery is almost always one I will personally recommend to prevent the possibility of GDV in your dog’s future. However, it is not incorrect to discuss this preventative measure with your veterinarian if you own any large breed, deep-chested dog. Prevention, in this case, is far superior to having your dog potentially experience a life-threatening condition. 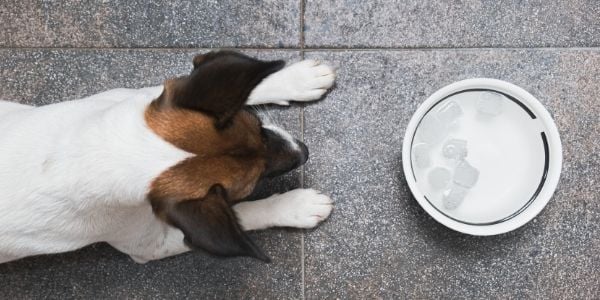 Ice Water Does Not Cause Bloat

Unfortunately, in one case back in 2007, a patient passed away after what the owner thought was bloat following the consumption of ice water. Surgery confirmed that the patient's stomach was not actually rotated as expected with GDV. However, the dog health rumor mill became very concerned with ice water and its association with bloat or GDV. This has been dispelled as a true cause of GDV, as it has not been able to be reliably repeated in any form of study into the causation of GDV in dogs. As always, it is recommended everything should be given in moderation, just like in people.

The survey is anonymous and takes 2–5 minutes. The information you share will help many more dogs. 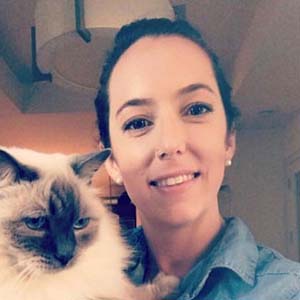 Dr. Stephanie received her Bachelor of Science (Maj. Vet tech) from the University of Queensland, Australia, in 2006. After graduation, she moved to the other side of her beautiful, sunny country, to the most isolated city in the world (Perth, Australia), to begin her veterinary degree at Murdoch University. 5 years later, she received a dual degree in Veterinary Biology and Veterinary Medicine and Surgery.

After all this schooling, Dr. Stephanie packed her things, her beloved Labrador & fluffy cat, and made the big move to the USA. She lives and practices at a clinic in the “big apple.”