Antifreeze is Poisonous to Dogs and Cats 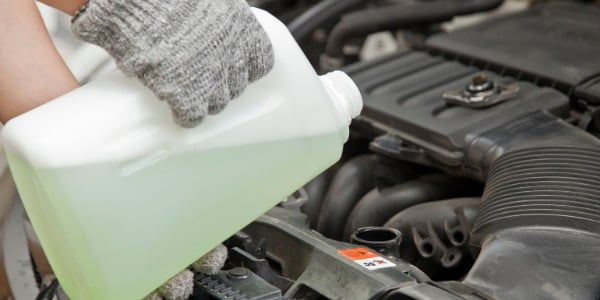 Ethylene Glycol – What Every Pet Owner Should Know

Most antifreezes contain ethylene glycol, a chemical compound that causes significant, often fatal, problems for both cats and dogs.

When an unsuspecting pet first licks up the antifreeze — which, sadly, many do —  the ethylene glycol (EG) can cause early signs such as:

The more dangerous part of the toxicity though occurs when the liver starts to metabolize the EG into other compounds, which themselves have wide-ranging disastrous effects within the body.

One of the most damaging effects is the formation of mineral crystals which settle in and lead to failure of the kidneys. This is the main cause of death in ethylene glycol antifreeze poisoning cases, and this crystal formation can begin is as little as 12–24 hours for cats and 24–72 hours for dogs.

Because treatment is more likely to be effective when initiated prior to the formation of these mineral crystals, any pet that has known or suspected exposure to antifreeze should be brought immediately for veterinary evaluation and testing. It takes just a few licks to cause serious damage to a cat (licking it off their paws or their fur can be enough -- they don't need to lick it directly off the ground or from a puddle), and just a few good laps can cause problems for a dog.

UPDATE (Sept. 21, 2015): Further increasing the importance of prevention (and earlier recognition and treatment in cases of exposure) is the fact that the prefered treatment and antidote for ethylene glycol poisoning — a compound called Fomepizole (a.k.a. 4-MP or Antizol-Vet) — has become increasingly more difficult for we vets to get our hands on. A shortage made even more difficult when FDA approval for this drug was pulled in April 2015 at the request of the manufacturer, who has discontinued production of the drug. This shortage means that more cases are now needing to be treated with intravenous grain alcohol (ethanol), an effective treatment, but one that can have more potential complications compared to treatment with Fomepizole.

Precautionary steps to prevent EG Antifreeze toxicity in your pets include:

Note too that antifreeze isn’t used just in cars and trucks. It’s also present in some snow globes and added to toilets in winter cabins in certain parts of the country (to prevent the water from freezing). And, in some places, it’s even added to garden fountains to prevent winter freezing. See how this last application is affecting cats in England.

And speaking of keeping things from freezing...check out our suggestions for pet safer ice melters and how to identify if your pet is suffering from being exposed to those that contain sodium chloride.