What to Do if You're Bitten by a Cat 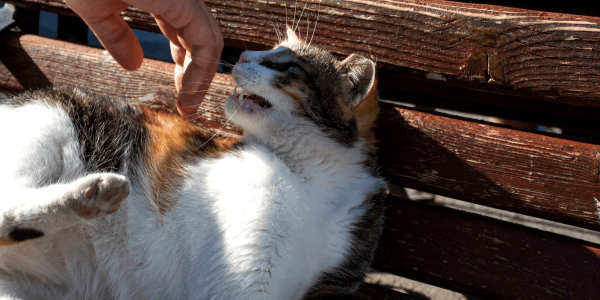 How Serious is a Cat Bite?

Cat bites are common injuries. In the United States, data shows that cat bites account for between 5–15% of all animal bites inflicted to humans. Most don’t cause problems but depending on the location and the depth of the bite, they can be very serious. Only a medical doctor for humans can tell you for sure what is serious or not. If you’ve been bitten by a cat, you should contact your healthcare provider and have them examine the wound.

Why Cat Bites Are Dangerous

Cat bites can be highly infectious. The narrow and long teeth of a cat act like needles that “inject” bacteria from both the human’s skin surface and the cat’s mouth (the most common bacteria being Pasteurella multocida) into the wound. Although the bacteria are normal (“healthy”) when it exists in these sites, it is not once the bacteria are “injected” by the bite underneath human skin. The puncture wound rapidly seals over, trapping the bacteria where they can easily multiply.

Depending on the location and depth of the wound, the bacteria can spread to the surrounding tissues, leading to cellulitis. Cellulitis is a bacterial infection that involves the inner layers of the skin. Signs of a cellulitis infection typically include: 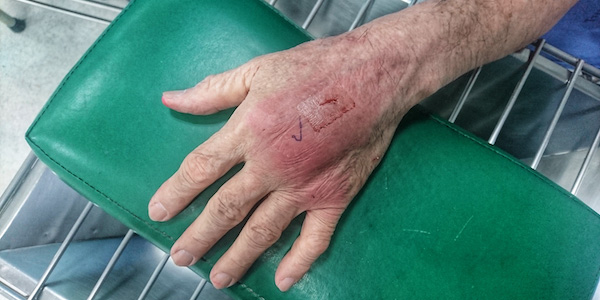 If untreated, it can lead to a potentially life-threatening condition called septicemia (which is different than sepsis). Also known as blood poisoning, it arises when the bacterial infection enters the bloodstream and the bacteria and their toxins are carried throughout the body, causing injury to other tissues and organs.

What to Do if You are Bitten by a Cat

Immediate Care for a Cat Bite

If the cat bite has broken the skin, immediate action should be taken.

The time it takes for wounds to heal depends not only on the extent of the damage but also on your overall health. If the bite is infected and appropriate treatment is implemented, the infection will usually heal within 7-10 days.

You may ask yourself, “Do I really need to see a doctor for a cat bite?” The simple answer is yes. 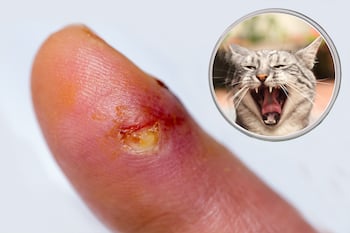 A physician can make sure that the injury is thoroughly cleaned, and properly treated, and prescribe any needed antibiotics to reduce the risk of infection. They can determine if the wound is best treated by suturing the area or leaving it open to heal. Pain medication may also be prescribed.

If it’s been more than 10 years since your last tetanus vaccine, a tetanus booster may be recommended. Also, if the cat is a stray or has an unknown rabies vaccination history, rabies prophylaxis (anti-rabies) treatment may be recommended. Prompt attention is critical. Once the rabies virus reaches the spinal cord and brain of its victim (human and animal), it is almost always fatal.

Follow-Up Care for a Cat Bite

After the initial treatment of the cat bite wound, watch out for the following signs:

If any of the above occurs, contact your healthcare provider as soon as possible. 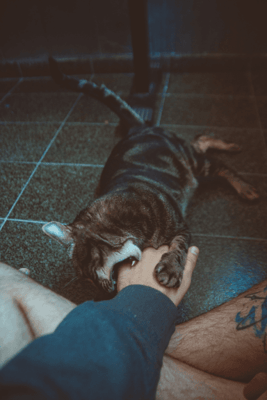 How Common are Cat Bites?

As a veterinarian, being bitten is a hazard of the job. However, I never thought a patient would land me in the hospital. While giving a cat some oral medication, she got away from me. Even though I knew better, I reached out to grab her as she was making her escape. Well, that was definitely a mistake. She proceeded to display her displeasure by clamping down on the knuckle directly in the joint of my left index finger.

Fortunately, I had the presence of mind to remember that the severity of a bite is made worse when one pulls the targeted body part away from the animal while they still have their chops on you.

I used my right hand to open the cat’s mouth and then gingerly removed my injured left hand. Even though I thoroughly cleaned the bite wound and was easily able to control the bleeding, soon after, the area around the bite wound became red and swollen with increasing amount of pain. This led to a trip to the emergency room, where I was subsequently hospitalized, receiving IV antibiotics and close monitoring. Although the threat of surgical intervention lingered in the air like an unwelcome house guest, the infection eventually subsided after three days, and I was released to see another day outside of the confines of a hospital room.

What Will Happen to the Cat Who Did the Biting?

In many areas of the country, a physician is required by law to report the bite incident to the local health department. If the biting offender is a known cat with a known rabies vaccination history, the cat will usually be placed under quarantine, typically carried out via home confinement. If their rabies vaccination is current, this could range from 10–14 days, with three visits to the veterinarian during this time to assess the cat for signs of rabies. This timeframe is needed to determine if the cat was shedding the rabies virus in their saliva at the time of the bite. If the rabies vaccination has lapsed, the quarantine time may be longer.

If the biting cat is unknown or a stray, take a picture of the cat if possible. Contact your local health department or animal control with a description of the cat and their location.

All cat bites should be reported to the local health department. This not only protects your own health, but that of other people too. The quarantine period and rabies observations by a veterinarian assures the safety of those who might come in contact with the cat, both two-legged and four-legged, and it also assures the health of the cat who did the biting. 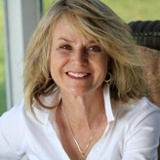 Dr. Susan Krebsbach, affectionately known as Dr. Susan, has always had a passion for animals. After graduating veterinary school at The Ohio State University, she worked as a small animal general practitioner for several years before opening a veterinary animal behavior consulting service, Creature Counseling, where she works with clients and organizations on addressing animal behavior problems and how to prevent them.