Inappropriate Elimination in Cats: Why it Happens and How to Prevent it 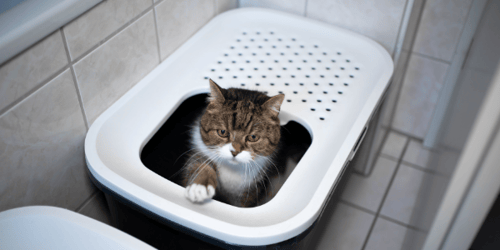 One of the most common complaints people have about cats is problems with eliminating (urinating or defecating) outside of the litter box.

In one study, 57% of cats referred to a veterinary behaviorist were referred for this problem.1  In another study, roughly 1 in 4 cats, surrendered to a shelter had a history of daily or weekly elimination outside the litter box.2 And a third study showed 9% of cats showing this behavior within three months of adoption.3

While it is one of the most common issues cat owners face, it is also one of the most frustrating and is one of the reasons there are countless numbers of cats now in animal shelters across the country. Many cat owners feel there is nothing they can do about the problem, but that isn’t the case. Making a few environmental changes can improve or even solve the problem and make everyone in the household much happier.

Reasons Cat Go Outside of the Litter Box

When a cat is urinating or defecating outside the litter box, there is usually one of three things going on:

The First Step Should be a Visit to Your Veterinarian

There are several medical conditions that would cause this kind of behavior, including urinary tract infections, bladder stones or crystals, kidney disease, diabetes, hyperthyroidism, and arthritis. Your veterinarian will conduct a physical exam and may evaluate a urine and/or stool sample, x-rays, and an ultrasound to rule out any gastrointestinal or urinary issues. If all urinary and other medical problems are ruled out, then it’s most likely behavioral.

When the reason is behavioral 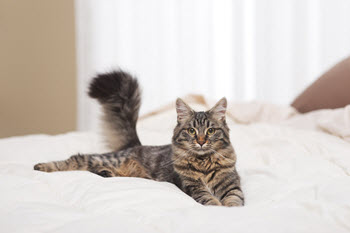 The first type of behavioral issue is spraying or marking (these terms can be used interchangeably). It’s important to realize that spraying is all about social communication. The cat is leaving a message: “Fluffy was here at 10:22 a.m. on Monday.”

The reason the cat would feel the need to leave a message could be due to stress or territorial issues. Both of these issues can be alleviated by environmental enrichment, prescription medications, or natural remedies like pheromones and herbal supplements.

Always check with your veterinarian for the proper use of medications and natural remedies. Some things that are safe for people or dogs are not safe for cats, so it’s important not to self-diagnose or take a recommendation from a pet store clerk or human pharmacist.

Typical Scenarios That Would Cause a Toileting Aversion

What Can You Do About Your Cat Going Outside the Litter Box?

For all of these scenarios, the best way to find a solution is to start testing different options by offering the cat a choice between the current option and something new. For example, offer a second litter box with a different litter choice in the same area as the original box and see which of the boxes is used more regularly. If there isn’t a specific litter preference, you can also test for other preferences such as box type, box size, litter depth, or box location.

Always make sure it’s easy, convenient, and comfortable for the cat to access the litter box. And while you are testing, it may be helpful to block access to any area the cat has started preferring to urinate. For example, if they are choosing a certain closet or bedroom, close those doors. If they are choosing an area rug, roll it up and store it for a while.

The sooner this issue is identified, the more likely it can be addressed and treated. It may be beneficial to consult with a veterinary behaviorist as soon as you’ve ruled out any medical issues. A behaviorist will create a concrete plan to follow that will solve the issue quickly with as little stress on the cat and the owner as possible.

Dr. Pachel is an accomplished board-certified veterinary behaviorist and highly sought after lecturer on many aspects of animal behavior. His approach to animal behavior cases focuses on the importance of the human-animal bond and the wide and varied roles that companion animals play in the lives of their families. He lectures and teaches throughout the country and owns and practices at Animal Behavior Clinic in Portland, OR. In his spare time, Dr. Pachel loves to run marathons, practice yoga, take weekend RV excursions, and discover new beers...not all necessarily at the same time though.