For many people, the most dreaded thought as a cause of their dog’s itching and fur falling out is mites. And for good reason!

This issue is most often referred to by one generalized term – mange! We will explore the two most common mites, demodex and scabies, that may be causing your pet to feel less than ideal, and we'll give you some tips to make them feel better soon! 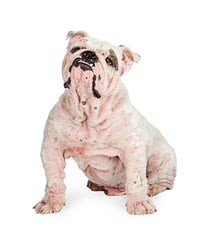 Them mites, them mites, them itchy ol’ mites! The thought of bugs or parasites crawling on us or our pets that we can see makes most of us cringe in fear. Imagine the ones we don’t see – the microscopic parasites that exist in the hair follicles or skin. These are called ectoparasites.

What Is Demodicosis & Sarcoptic Mange?

Demodicosis is caused by demodex, which is an eight-legged, cigar-shaped parasite that normally lives in the hair follicles and sebaceous (oil) glands of dogs. The belief is that the mother passes it to the puppy in the first few days of life. In the largest majority of dogs, the mite creates no clinical (obvious or noticeable) signs of disease. But there is a small portion of dogs where the mite grows rapidly, causing the following symptoms:

What could possibly happen next is, the dog can develop a secondary pyoderma (a bacterial infection in the skin marked with pus-filled lesions) throughout the different layers of skin.

Sarcoptic mange, which is caused by the sarcoptes scabiei mite, is a somewhat circular shaped mite, and it's characterized by two pairs of short legs with suckers on the front of the body and two pairs of legs towards the back under the body. They are a superficial burrowing mite (meaning they burrow in the outermost layer of the skin), and they secrete allergenic substances that cause intense itching. They are highly contagious and are primarily transmitted by direct contact, but it is possible that grooming instruments and kennels may harbor these mites.

It is a highly contagious, nonseasonal, intensely itchy skin disease. Dogs are most commonly affected, but humans and cats can be as well. The pruritus (itchiness) and lesion are most severe around the face and underside of the body, but the elbows, hocks ("elbows" on the back legs), and ear flaps can also be affected. Common signs of this are:

Sarcoptic mange is considered a zoonotic disease. This means that humans are at risk if exposed to an infected pet, even if the pet is not showing signs of the disease. Likewise, a pet can acquire the parasite from a human. Therefore, if your pet has been diagnosed with scabies/sarcoptic mange, isolate them from other pets and be sure to wear gloves when handling them and then shower and change clothes after finishing their care.

Dermatitis and How You Can Help Your Dog

How Did This Happen?

Demodicosis: The microscopic demodex mite is always present in humans, as well as in dog’s hair follicles. It will present in one of three clinical syndromes when there has been some challenge to a dog’s immune system. These are the three typical syndromes:

There are some generalized reasons your dog may get one of the first two syndromes listed above:

Sarcoptic mange: Unlike demodex mites, mange mites are not normally present in the skin. It is a highly contagious disease – meaning it spreads from dog to dog very easily and to humans. Typically, affected animals have a history of being in animal shelters, being in contact with stray dogs, or visiting either boarding or grooming facilities.

Treatment will depend on which mite is present on your dog and to what extent the skin is affected. The key to having the outcome be successful is early diagnosis.

Demodicosis is a challenging condition to treat, and there's a possibility it can come back.

Here are some general ideas of possible treatment paths your veterinarian may choose:

NOTE: If your dog is found to have Demodex, certain treatments may require your veterinarian to perform a heartworm test.

NOTE: Steroids can cause the signs and symptoms of Demodex to worsen because they can lower your pet’s immune system and cause multiplication of the mites. Make sure you let your veterinarian know if your dog is on any steroidal medications.

For sarcoptic mange, the treatment generally includes the following:


NOTE: WEAR GLOVES any time you are handling your dog.

NOTE: It is highly recommended that before stopping treatment that your dog has a negative skin scrape (no mites seen) 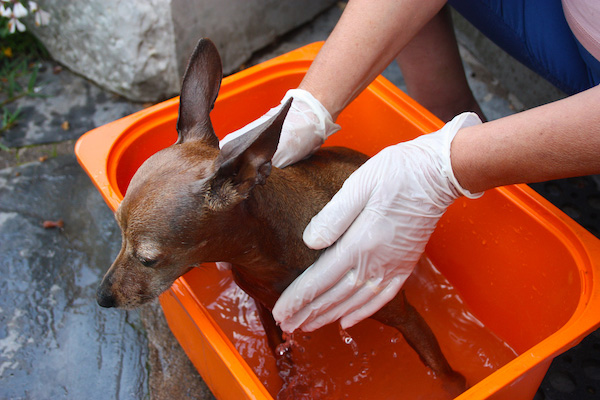 To help your pet to be comfortable, be sure to give all the medications as directed and follow all of your veterinarian’s recommendations.

Some other things you can do are as follows:

How Do You Know Things Are Improving?

This condition will take about a week or two to truly seen significant improvements with demodicosis and as long as 8 to 12 weeks for healing.

For this condition, it may likely take about 14 days to see a significant decrease in itchiness and as long as 3 months for complete healing. Please note with sarcoptic mange, itchiness often worsens for the first few days. This is believed to be due to an immune response to the dying mites. Don't worry, things will get better.

NOTE: it may be necessary for a short course of steroids to lessen the itchiness. Therefore it is important to monitor your pet closely during the first week of treatment. If there is absolutely no improvement, consult with your veterinarian. 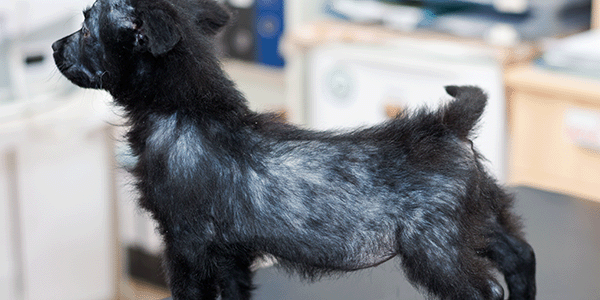 Here is a puppy with demodicosis before treatment (above) and during treatment (below). You can see that the hair is growing back and the skin is healing. 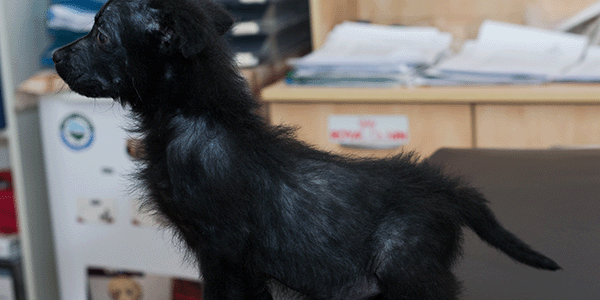 You will know that your dog is improving, with either condition, because the itchiness will slightly improve over the first 7 to 10 days. You will also notice that the redness, inflammation, scaling, etc., will improve. Overall, your dog will just begin to seem happier!

How Do You Know When Things Are Not Improving? What You Should Do.

For both demodicosis and sarcoptic mange, some things you will notice if your dog is not improving include:

Remember, improvements with these diseases do not occur immediately in most cases. But if you do not see improvements within 7 to 10 days or notice any symptoms to be worsening, please contact your veterinarian. They may need to add or change your dog’s medications. How to Prevent This from Happening in the Future

To prevent a relapse of demodex mites, be sure to continue your pet’s medication for the full duration of treatment, and do not stop until your veterinarian has been able to confirm that your dog has had two negative skin scrapes two weeks apart. Be sure to always provide your dog with a proper well-balanced diet. It is recommended to spay or neuter your pet; if your dog has had Demodex before reaching puberty, they may have a relapse if they are not spayed or neutered before that time.

If your dog has adult-onset demodicosis, finding the systemic cause and treating it is critical in helping to prevent a relapse. These dogs may need additional immune support. Therefore, contact your veterinarian for their recommendations on how to do so.

To prevent sarcoptic mange from re-occurring, be sure to keep your dog’s environment treated for parasites. Use the recommended preventative treatments for your dog – some topical and oral flea/tick treatments are also effective at preventing sarcoptic mange (so, ask your veterinarian). Be sure to keep your dog away from stray dogs. And ask your groomer and boarding facility what their sanitation protocols are.

Lastly, with regards to sarcoptic mange, you may need to have your dog tested for allergies to dust mites because 30% of dogs will test positive for allergens to them. This may require your dog to have allergy treatments.

The Pet InfoRx® is made possible, in part, through our partnership with AlignCare®. 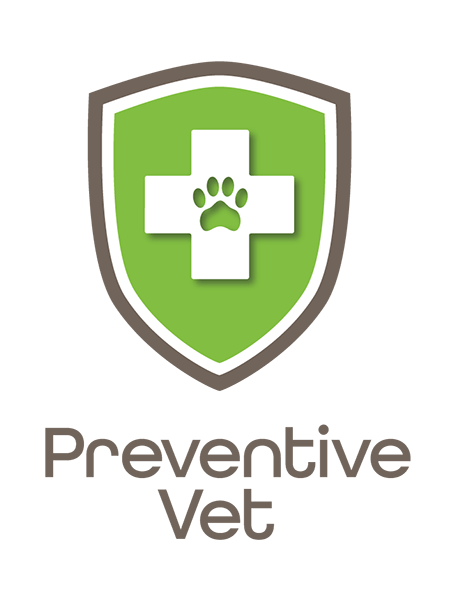