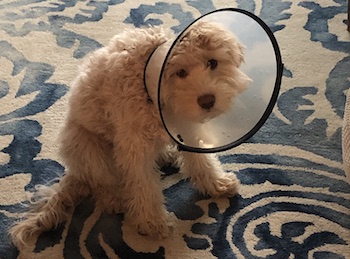 The Cone. Cone of Shame. E-collar. Whatever you call it, your dog is bound to have to wear one at least once in their lifetime due to spay or neuter, an injury, or skin condition. Elizabethan collars (e-collars) help your pup heal by stopping them from licking, scratching, or rubbing the affected spot.

Elizabethan collars were named because of their likeness to ruffs popularized by Queen Elizabeth I in the Tudor period. While your pup doesn’t look as stylish as the Queen, it does protect them from licking, scratching, or biting areas they shouldn’t, promoting faster healing times.

My puppy Mary Berry, a mini Goldendoodle, celebrated National Spay Day by getting spayed! With a bunch of extra hugs and some tears (mine more than hers), I left her in the capable hands of our veterinarian. I picked her up about 6 hours later — loopy, sleepy, and wearing a cone. She was very excited to see us, and her cone was flopping around every which way.

END_OF_DOCUMENT_TOKEN_TO_BE_REPLACED

The 'Cone of Shame': How to Help Your Dog Feel Comfortable Wearing an Elizabethan Collar

Memes abound of pups wearing the dreaded cone post-surgery. While it might be quite entertaining for us humans to watch our dogs try and maneuver with a lampshade on their head, it can be pretty stressful for them. Simple things like eating food or drinking water are more complicated, and their vision and hearing are different while wearing an e-collar.

Some dogs take wearing a cone in stride. For others, the increased difficulty of movement, change in hearing and vision, paired with feeling a bit "off" while medicated, can really stress them out. If you take off their cone for mealtimes, you might notice that they run the other way when you grab it to put back on or spend a lot of time trying to wiggle out of it or try to paw it off.

END_OF_DOCUMENT_TOKEN_TO_BE_REPLACED

Minimizing the Risks of Anesthesia in Dogs Anesthesia is like any medical procedure—there are benefits and risks, and death can occur under anesthesia. Approximately one in 1,000 healthy cats and one in 2,000 healthy dogs die under anesthesia each year. While any anesthetic-related deaths are unacceptable, these incidence rates are actually quite low. But of course, there’s still plenty of room for improvement. One of the reasons we still see deaths related to anesthetic procedures is because not all practices are actively taking all of the steps necessary to reduce anesthetic risk.

This article will help you understand the process of anesthesia, and empower you to ask the important questions of your pet’s medical team to help minimize your pet’s anesthetic risk.

Anesthesia occurs in several steps, with opportunities at each step to minimize risks for your pet.  Below I present a simple outline of the steps involved in anesthesia.