When Birds and Windows Collide: What You Can Do to Help 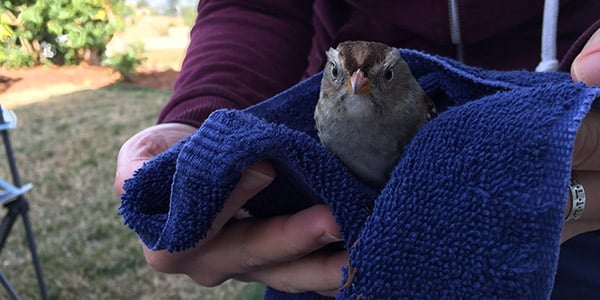 It was a crisp and sunny afternoon at Preventive Vet's Seattle office, when we were startled by a loud thud.

Deep down, we all knew what it was, even if for a moment we hoped we were wrong. We sprang up from our seats, went outside, and had our fears confirmed upon finding a little sparrow, no larger than your hand, laying motionless on the ground.

It had been knocked unconscious after running into one of our large front windows, and though its eyes were closed, it was still breathing.

Worried about neighborhood cats and other predators, we knew we had to act fast, but we also didn't want to cause more harm by making well-intentioned, but uneducated decisions. So we went searching for expert resources, and in a few minutes we were using a soft towel to gently scoop it up and place it in a spare pet carrier, which we also filled with lots of fluffy towels.

Following the instructions from West Sound Wildlife, we then brought the sparrow inside and put it in a private room, away from light, sounds, our office pets, and people, in an attempt to speed the recovery and make our bird friend more comfortable.

We continued to check on it every few hours to see if there was any progress, but with the exception of opening its eyes for short periods of time and moving slightly to turn around, there wasn't much to see. We even brought it back outside and opened the carrier to see if it had healed enough to fly away, but it preferred to sit still. We knew it was time to bring in some experts. The sooner you bring the bird into a care facility, the better its chances of survival and rehabilitation. 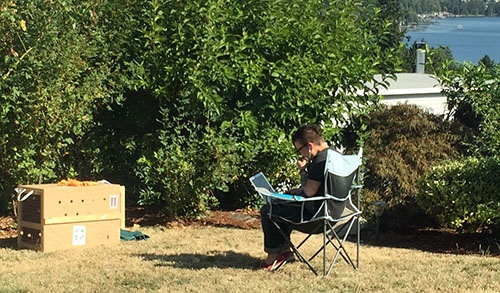 Fortunately, there are a number of wonderful wildlife resources in the Pacific Northwest. We were thrilled to come across the incredible PAWS Wildlife Center, which has cared for more than 128,000 wild animals since 1981, according to its website. In addition to taking in our little sparrow, PAWS has rescued everything from bears to otters!

The amazing volunteers and employees took in the sparrow and got to work. They let us know he was a white crowned sparrow, and native to the area. This is unlike the common House Sparrow, a non-native European species that has spread throughout North America.

That's not all we learned, and we want to share some invaluable information, should you ever find yourself in a similar situation. At Preventive Vet we're focused on reducing preventable harm to dogs and cats, but we want the same for all animals and humans alike. So we'll be taking preventive measures here at our office to help ensure that birds won't continue to fly into our windows. Here's some of what we learned.

Why Birds Fly Into Windows

Birds don’t see through a window as much as they see the reflection on a window. Under the right conditions, a bird might see a large window not as a solid surface, but just as a wide-open space that’s actually the reflection from behind them.

Birds collide with windows when they think they’re flying into an open space, and it happens more than you might think.

In fact, according to the Toronto-based organization FLAP Canada (Fatal Light Awareness Program), 1 to 10 birds die per building, per year in Toronto alone.

That’s potentially more than 9 million birds per year in just one city.

And it’s not just during the day, but also at night when the light of commercial buildings attracts more birds to the area that can become further confused by reflections in the glass. This problem is at its worst during migratory periods when more birds pass through urban areas, and it's especially a problem for large, commercial buildings with lots of glass.

What You Can Do to Protect Birds From Window Collisions

For one, you can donate to your local organizations or ones like PAWS and FLAP Canada. These organizations do amazing work to rehabilitate and protect wild animals. 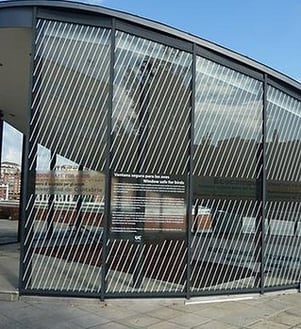 But there’s something more you can do right now to prevent birds from mistaking your window for a patch of open sky. There are a number of products designed to prevent just such a tragedy. CollidEscape and Window Alert for example, offers a variety of reflective decals, tapes and window patterns that let birds know a window is actually a solid surface.

The adhesive patterns stretch across the entire window. If you choose to add pieces of reflective tape, it’s important to make sure the individual pieces are close together. A bird will not see a single piece of tape, or even a few pieces of tape, and understand that the whole window is a solid object. Instead, they might try to fly past the individual bits of tape, which will still put them on a collision course.

Make sure to use enough tape so the gaps between pieces are not wider than a bird’s wingspan. This will prevent them from trying to “fly through.”

Another window dressing resource PAWS told us about is Acopian Bird Savers, as well as these window solutions for commercial buildings in particular: Acid-Etched Windows; Fritted Windows.

It’s also a good idea to walk around your home or apartment, if possible, to see the places where reflections might confuse a bird in flight. Then make sure those places are well marked. Another good tip is to move houseplants away from windows.

What to Do If a Bird Hits Your Window

If a bird hits your window, or if you find an unconscious bird, here’s what PAWS recommends:

You can learn more about what to do if you find an injured or baby bird, or a raptor, at Hawk Watch International. For other wild animals, check out the International Wildlife Rehabilitation Council’s "How to Rescue a Wild Animal."

How to Find a Wildlife Rescue Organization in Your Area

We can’t express enough how amazing PAWS was when we needed help. Although they are only based in northwestern Washington, there are many more organizations throughout North America dedicated to helping injured wild animals. Just as it’s a good idea to keep information on-hand about your nearest Animal ER, it’s also a good idea to locate a wildlife rehabilitation center nearest you. This way, if you come across an injured animal, you’ll already know where to go for help.

Please note: Unless otherwise stated, products, services, and/or companies mentioned, or links to same, are for illustration purposes only and their inclusion does not constitute an endorsement from Preventive Vet. Additionally, we are NOT compensated if you choose to buy what we feature. 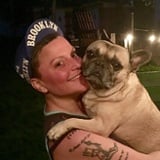